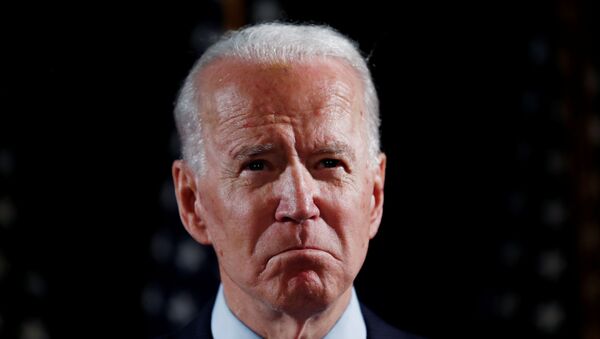 © REUTERS / Carlos Barria
Subscribe
In the worst-case scenario, there is a risk that 77-year-old Joe Biden won't be able to construct whole or meaningful sentences or even maintain the activities of daily living, Norwegian psychiatrist Fred Heggen has mused.

Having analysed the public appearances of US President hopeful Joe Biden, Norwegian psychiatrist Fred Heggen has noted an obvious congitive failure in his mental health, which may be a sign of worsening dementia.

What began as minor episodes when Biden started his election campaign to become the Democratic presidential candidate – “forgetfulness, mischief, confusions, gaffes, and aggression” – has worsened “at galloping speed”, Heggen noted in an opinion piece published by Nettavisen.

In the piece called “Why Democrats are rallying behind a possibly demented candidate?” Heggen pointed out that Biden is now largely screened from contact with the media and the public. When he appears, the speech lasts a maximum of 10 minutes. Biden is either instructed via an earpiece or reads the text on a teleprompter. No questions from the press are allowed.

The few times Biden took part in an actual debate, he struggled with impaired concentration, memory loss, and sudden blocks of thought, he said.

“Of course I may still judge him wrongly, but in my eyes he appears as a person who is already very affected by dementia. And the presidential election is still far ahead. What if his condition worsens further over the next two-three months?” Heggen asked rhetorically.

In the worst-case scenario, Heggen mused, there is a risk that Biden won't be able to construct whole or meaningful sentences or even maintain the activities of daily living (ADL).

“This is not scare propaganda on my part. Everyone who has had experience with people with dementia knows that a deterioration can come quickly and have a particularly dramatic course”, Heggen wrote, warning of the potential dangers associated with a potential dementia sufferer as a president hopeful.

“This man is who the Democrats and the other globalists of the world trust. This is the man who will sit in the White House with his finger on the nuclear button. We are no longer talking about rational politics. We are talking about the madness put into the system”, Heggen concluded.

Fred Heggen is a medical director at the Lovisenberg Diaconal Hospital's psychiatric clinic in Oslo and a columnist at the online newspaper Nettavisen.

While the speculations are yet to be dispelled or confirmed, videos of Biden's gaffes hashtagged #Bidendementia and #dementiajoe among others, abound on social media.

Here @JoeBiden says to the crowd in South Carolina that he is "running for the United States Senate" and that if they don't like him they can "vote for the other Biden".

000000
Popular comments
Biden is like a wind-up jolly crazy chimp. Once he's out of juice, he stops clanging away and just bares his teeth and makes funny noises with his big mouth.
Tk
21 April 2020, 09:49 GMT2
000000
The blonde one is insane with an IQ less of his shoe-size... it wouldn´t make any difference if sleepy Joe is in the WH...