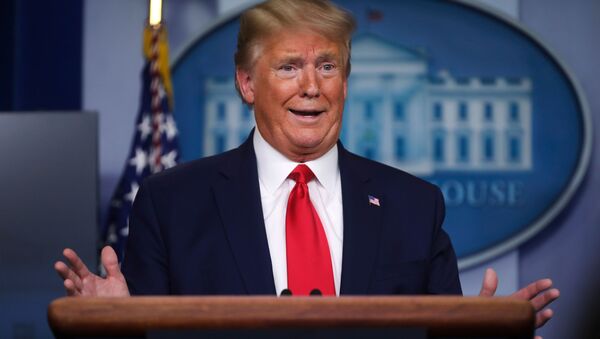 During the Monday Coronavirus Task Force briefing, US President Donald Trump claimed that “a lot of people” are blaming Democrats for the impact of the COVID-19 novel coronavirus on the US because lawmakers were focusing more on the impeachment process than the happenings in China back in January.

In a comment that would make one think the word of the day was “foment,” the president said Democrats “could have been looking into China” instead of “wasting all that time” impeaching him at the beginning of the year.

Trump suggests Democrats are responsible for the coronavirus outbreak being so bad in the US because they were allegedly preoccupied with impeaching him instead of investigating China in January pic.twitter.com/dGZwkHIz5D

“A lot of people are blaming the Democrats for wasting all that time, because it was during that period of time - as you know - that [COVID-19] was fomenting,” he claimed, immediately thereafter claiming that he believes there has been “a great spirit of bipartisanship” while “the people are coming together” amid the pandemic.

“I do think that the press, the media, foments a lot of this - a lot of anger. I really believe it. Foments tremendous anger,” Trump claimed.

Trump was formally impeached on two articles by the House of Representatives on December 18, 2019. The Senate trial, which resulted in the acquittal of Trump for the counts of abuse of power and obstruction of Congress, began on January 14 after House Speaker Nancy Pelosi announced the names of the House managers prosecuting the case.

The US president’s implication that Democrats could have been able to better protect the US from the novel coronavirus if they had not been so focused on the impeachment process did not go over well with netizens old enough to recall what’s happened over the past four months.

"I haven't left the White House in months". pic.twitter.com/GxbEc7yf8p

Our president and his crime family are dependent on China.

He is all talk. pic.twitter.com/KDQg3DcGby

Pretty sure that's the CDC's job, not the Democrats. Who's in charge of the CDC again?

Yet he still has not said what he did in February.

He’s off on a completely nonsensical tangent

The remarks from Trump during the briefing came days after newly-appointed White House Press Secretary Kayleigh McEnany posted a tweet with similar rhetoric.

When President Trump was taking early action to restrict travel from China and save American lives, Pelosi was focused on the Democrats’ sham impeachment.

Trump also took time on Monday to tweet that the “Radical Left” and “Do Nothing Democrats” are playing a “very dangerous political game” by calling for more COVID-19 testing by the federal government.

... “Testing, Testing, Testing,” again playing a very dangerous political game. States, not the Federal Government, should be doing the Testing - But we will work with the Governors and get it done. This is easy compared to the fast production of thousands of complex Ventilators!