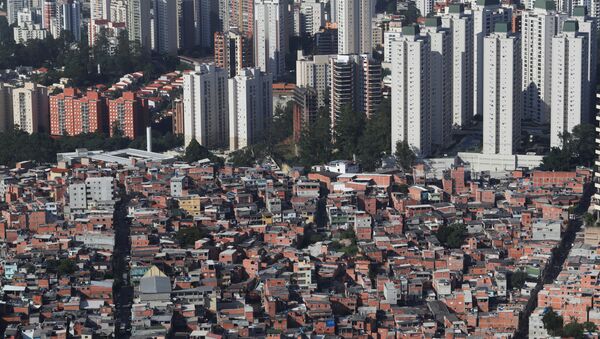 © REUTERS / AMANDA PEROBELLI
Subscribe
Ekaterina Blinova
All materialsWrite to the author
Brazil's crowded favelas, home to millions of low and middle-income dwellers, have been left to solve the COVID-19 crisis on their own while the federal government has become bogged down in internal political clashes and left incapable of adequately handling the pandemic, say Brazilian observers.

Although the number of confirmed COVID-19 cases has exceeded 38,000, with over 2,400 dead, and continues to rise in Brazil, the country's President Jair Bolsonaro has doubled down on protesting against the quarantine measures and clashing with state governors over the imposed lockdowns.

Meanwhile, the nation's densely-populated favelas, low and middle-income informal settlement neighbourhoods, are struggling to avoid infection and trying to make their ends meet, while being largely neglected by the Brazilian government.

According to various estimates, there are from about 12 to over 13 million people living in these unregulated settlements across Brazil. In Rio de Janeiro alone some 1.5 million people, or around 23-24% of the city's population, live in favelas.

There are no health services, basic sanitation, or housing infrastructure in these crowded communities, with most of dwellers working informally and thus having no social protection, says Alan Dantas, a Brazilian journalist and editor of Dossier Sul, an online political magazine.

"According to the DataFavela Institute, the biggest problems faced by these populations are exactly the lack of water, food and access to supplies", the journalist says. "In addition to these problems, it is difficult to maintain isolation within favelas: 80% of residents need to leave their favelas to find food and hygiene items. With the lack of management by the Brazilian government, only solidarity has been the way out for the residents of these places, the hashtag #COVID19nasFavelas comes precisely to alert Brazilians about this situation".

The residents are organising solidarity networks and kicking off campaigns such as "Voz das Comunidades" (Voice of the Communities) aimed at raising donations for those in need, the journalist notes.

​"Photo taken recently by a resident of Nova Brasília, the region with the most suspected cases in Complexo do Alemão so far".

"The favelas are doing their best, which is exercising their feeling of sharing and solidarity", echoes Preto Zezé, the national president of Central Única das Favelas (CUFA). "In a territory with something around 1.5 million people, if you have difficulty in accessing basic items such as water and soap to wash your hands, alcohol and gel, it is something of distinction while the vast majority do not have food for the next week or sometimes for the next day".

​Gustavo Guerreiro, executive editor of the journal World Tensions and a member of the Brazilian Centre for Solidarity with Peoples and the Fight for Peace (CEBRAPAZ), agrees that sanitary problems, such as lack of sewer systems, drainage, drinking water, or an adequate garbage collection system and the agglomeration, caused by the lack of urban planning, opens the door for the faster spread of the coronavirus disease within the communities.

"It is common to find shacks or small houses of one or two rooms, with five or six people from the same family", he notes. "There is no way for the authorities to demand measures of social isolation in a situation of extreme precariousness like this".

​"Even the dog in Complexo do Alemão is wearing a mask ... Call upon the residents, let's all follow the recommendations of the Ministry of Health: Everyone has to wear a mask!!!"

How Bolsonaro is Adding Insult to Injury

According to Guerreiro, "the Brazilian people, in general, are very supportive": a certain portion of civil society organises actions to provide aid for the most vulnerable families, while local health professionals are also lending their helping hand. For its part, "the Bolsonaro government is going against the grain", the scholar points out.

"As soon as the first cases started to appear, Bolsonaro, through his minister, the ultra-liberal Paulo Guedes, tried to propose support measures, but only for the business community", he recollects. "[However], pressured by the National Congress, the president was obliged to approve an integrated package of actions to face the impacts of the crisis caused by the coronavirus pandemic in Brazil. The main one foresees the payment of an allowance of 600 reais ($114) to families in situations of poverty (the original proposal was one third of that amount)".

Still, this monthly allowance, which applies for each self-employed worker who was impacted by the crisis, is insufficient for Brazilian families, deems Alan Dantas. "A study by Ibre / FGV (Brazilian Institute of Economics of the Getúlio Vargas Foundation) points out that the COVID-19 crisis will leave 12.6 million people unemployed in the country", he stresses.

The situation is exacerbated by Bolsonaro's denial of the pandemic threat as well as the president's participation in public rallies amid the COVID-19 outbreak.

"Bolsonaro has been the most contradictory world leader amid the crisis caused by the coronavirus. He regularly takes to the streets of the federal capital Brasília to greet supporters in breach of the guidelines of the World Health Organisation (WHO) and Brazilian Minister of Health Luiz Henrique Mandetta with whom he was in an open conflict", Dantas remarks.

Bolsonaro repeatedly chastised the health minister for urging people to observe social distancing and eventually fired him on 16 April.

Preto Zezé highlights that the president's move has triggered growing concerns among Brazilians: "How could he remove a captain from a boat in the middle of the journey, not to mention that this minister was following global guidelines and consensus based on WHO principles? The virus, it infects everyone, came through the rich classes, but it is sacrificing the poor", he says. 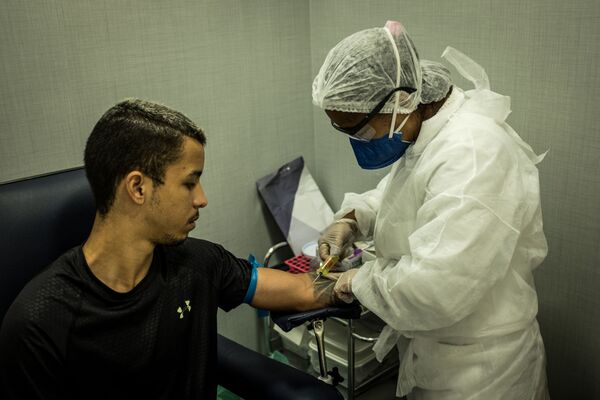 Gangsters Step In to Observe Lockdown

In the absence of government regulation and the president's controversial handling of the pandemic crisis, drug traffickers have stepped forward to impose and maintain coronavirus curfews in favelas. Thus, according to the Rio media outlet Extra, gang members have warned the inhabitants of the City of God favela: "We are imposing a curfew because nobody is taking [the coronavirus] seriously". Meanwhile, in Santa Marta, yet another Rio favela, gangsters handed out soap and placed signs near a public water fountain: "Please wash your hands before entering the favela", The Guardian reports.

"Organised crime in the favelas is formed by people from the community itself", explains Gustavo Guerreiro. "The profile of those who enter the drug trade is, in general, black, young, male, born in a large family and headed by a woman with low income. Most left school and accumulated some precarious work experiences. Many of them entered the trade in the hope of achieving a better material life for the family. It is normal for them to take this kind of care with their relatives and friends. It is not a question of romanticising crime, but it is a social fact. Despite the bloody and violent face of trafficking in the favelas, they do not declare war on their own community for an obvious reason: they are part of it. Traffickers exercise a complex power relationship and therefore tend to take certain precautions".

Preto Zezé agrees: "It's because many of [the drug traffickers'] relatives, who are either participating or not in illegal activities, live in these places".

According to Alan Dantas, "this is a sad reality present mainly in large Brazilian cities marked by inequality".

"Unfortunately, the historical absence of the Brazilian state in these places opened up space for these groups to take charge of power structures", the journalist elaborates. "In Rio de Janeiro, the drug trade itself was 'hampered' by the outbreak of COVID-19, leading to damage to the 'crime economy' which in turn represses local residents with even more violence, threats and curfews. While all this is happening, Bolsonaro continues with no action". 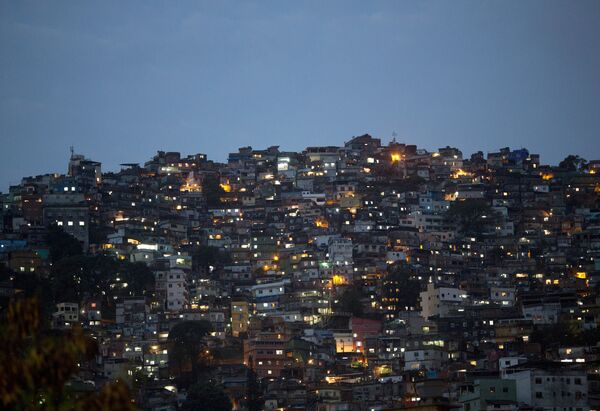 Meanwhile, the abandoned residents of Brazil's favelas continue to solve the problem on their own, Preto Zezé underscores.

"Today we have 5,000 favelas mobilised, and more than 100,000 volunteers who are making the interface between those who want to donate and help and those who need it most", he says. "I tell you, membership is desperate. And my expectation in the face of what I see now (I hope it will change) is the worst possible – given the level of social inequality, the indecisiveness of political power which has bogged down in the political clashes in the midst of this chaos, and a delay striking a social pact programme by the government and businessmen to guarantee social assistance and economic protection".

Gustavo Guerreiro shares Zezé's gloomy outlook: "Bolsonaro created, in the midst of the pandemic, a climate of profound political instability, colliding with governors, the executive and legislative branches. Chaos grips the country in the midst of its biggest health crisis", the Brazilian scholar says.

"The fact is that we have two major problems in Brazil: COVID-19 and Bolsonaro", Guerreiro opines, expressing concerns that the country may reach "a tragic record".

According to Dantas, the silver lining to this chaotic situation is that local governors continue to resist the position of the president and "do an independent job from the central power".

He reveals that political leaders opposed to the president's handling of the COVID-19 pandemic have created the campaign "Acabou, Bolsonaro!" (It's over, Bolsonaro!) and are currently collecting signatures for the president's resignation. They argue that Bolsonaro encourages chaos and takes advantage of the desperation of the most vulnerable population.