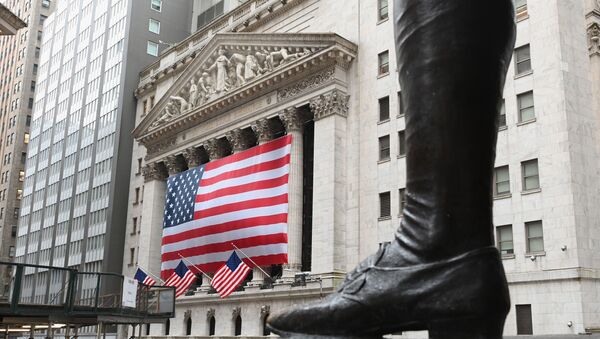 © AFP 2021 / ANGELA WEISS
Subscribe
US stocks took another tumble into red territory on Tuesday, marking back-to-back days in which the New York Stock Exchange experienced volatile trading amid a crash in global oil prices brought on by the COVID-19 pandemic.

“Markets rallied sharply last week on hope that the worst of the outbreak is behind us. This optimism is likely to face headwinds, as the reopening of the economy is heading for an intense debate.”

US President Donald Trump last week announced guidelines for a phased reopening for US states that would ultimately pave the way for a kick start of the American economy. The announcement came amid several protests held across the Land of the Free by Americans calling on their states’ respective governors to lift lockdown measures imposed to stop the spread of the novel coronavirus.

Yields on the 10-year Treasury note, meanwhile, also took a bit of a nosedive on Tuesday, falling to 0.55%. Analysts say that the drop, which marked yields’ lowest level since March, underscores investors’ diminishing appetite for risk as funds are transferred into bonds.

The day’s hectic trading was largely fueled by concerns surrounding oil futures, which initially saw the May contract for West Texas Intermediate drop to zero before sinking into negative territory on Monday - meaning sellers would be the ones paying interested buyers to take barrels from their stockpiles.

Although the May contract was able to reverse losses and make sufficient gains Tuesday before closing, investor worries weren’t exactly eased at the news, since the more actively traded June oil contract fell over 60% to some $7 a barrel at its lowest earlier in the day.

What’s more, a contract for July has also been affected by the oversupply, as its value fell over 20% to roughly $19.

Hours before trading wrapped for the day on Wall Street, Trump tweeted that he’d instructed secretaries of the Treasury Department and the Department of Energy to “formulate a plan which will make funds available” to American oil and gas companies. It’s unclear how much money would be shelled out or which companies would ultimately be eligible to receive it.

“This moment is of course historical and could not better illustrate the price-utopia that the market has been in since March, when the full scale of the oversupply problem started to become evident but the market remained oblivious,” she said.

Since early March, when the COVID-19 outbreak was declared a pandemic by the World Health Organization, concerns regarding its effect on the global economy have been at the forefront for many financial analysts, as dozens of companies and entire industries were forced to temporarily close. More than 22 million Americans have filed for unemployment since the beginning of March, according to data released by the US Department of Labor.

000000
Popular comments
It's more than obvious that the markets are rigged. US dollar should have gone down to the toilet. All the dollars printed all over the place but nobody trades the oil which is linked to the dollar. It should have gone down hard but the rigged markets keep it afloat. The £2.2tn will be gone soon with no effect and where is the inflation?

kernel.panic999
21 April 2020, 23:16 GMT4
000000
All of the western markets are a scam. Over valued corporations, undeclared debt liabilities, covert government subsidization, offshore tax sheltering etc. The schemes are endless. If there were real cause for concern the US would not be in the Persian Gulf playing war games, just to annoy Iran.