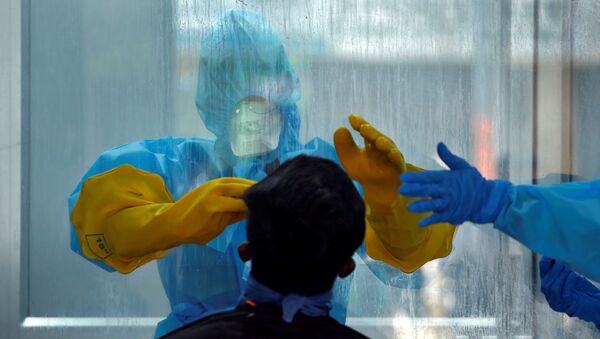 New Delhi (Sputnik): India earlier procured 1.5 million rapid-test kits from China to expedite the testing of COVID-19 in a country of 1.3 billion. After thousands of the Chinese-made kits failed to give accurate results, it has created a state of uncertainty regarding whether lockdown should be extended beyond 3 May.

The Indian Council of Medical Research, the apex body in India for the formulation, coordination and promotion of biomedical research, has advised states to immediately stop using the newly-distributed Chinese rapid-test kits (RT-PCR) for two days, after seeing huge variations in the results of the Chinese-made kits across states.

"We got a complaint about less detection from one state. So we spoke to three states and found that a lot of variation is there in the accuracy of test results of positive samples, in some places it is 6 percent while others it is 71 percent," said Raman R. Gangakhedkar, a scientist at the ICMR, on 21 April while addressing the media on COVID-19.

The western Indian state Rajasthan government on Tuesday announced that it will not use the Chinese-made RT-PCR kits as they were showing only 5.4 percent accuracy in testing COVID-19 cases, against a promised expectation of 90 percent accuracy.

"This is not a good thing because when such a huge variation is seen we need to investigate further even if it is the first generation of the test. We confirmed this with three states and found that the findings were true to an extent. This disease is only 3.5-months-old, so all technologies will be refined over time but we can't ignore these findings," he said, adding that ICMR would be sending expert teams on the field to validate the results.

A consignment of the RT-PCR testing kits was also withdrawn by ICMR from West Bengal state after they showed inconclusive results. The state government claimed that faulty Chinese RT-PCR kits are forcing officials to opt for multiple tests, further delaying COVID-19 diagnosis.

The Indian government must expedite COVID-19 testing across the country to analyse the level of pandemic and to eventually ease the lockdown that has been extended until 3 May from an earlier scheduled withdrawal of 14 April.

Several nations have raised concerns over India conducting less tests, with a population exceeding 1.3 billion, but ICMR claimed that for each positive case, the country tests 24 people, which is said to be better when compared to other nations, although no nations were offered as a quantifying metric, according to reports.

According to the federal Health Ministry of India, the country has over 18,985 coronavirus cases with over 600 deaths.