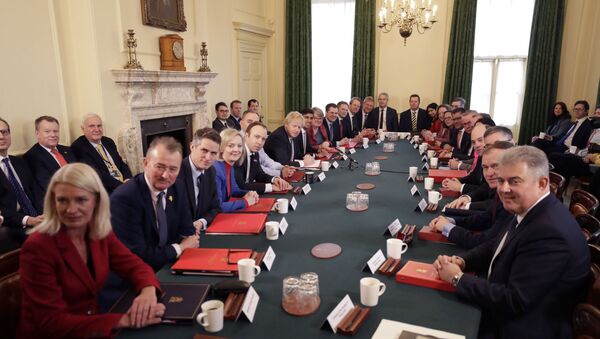 Lilia Dergacheva
All materialsWrite to the author
While Boris Johnson, who left hospital a little over a week ago, is already concerned about a second coronavirus wave, the other camp - the  Cabinet’s “hawks” - are increasingly warning about the devastating economic implications of the virus-induced lockdown.

As Prime Minister Boris Johnson is resisting calls from a very divided Cabinet to end the nationwide lockdown in the near future, one MP suggested in comments to The Times that the stint in intensive care had changed the prime minister.

“The prime minister is in a funny place, I think he's quite frightened. His illness and the warning from the doctors has really hit him hard", the MP explained, going on:

“To find himself floored like this has really got into his head. He has become really tentative".

Theresa Villiers, who previously served as environment secretary, meanwhile warned that the economic fallout of the lockdown could be “catastrophic” if it was prolonged.

“It's so vital that we do find a way to let the economy start to come out of what is effectively a medically induced coma — the longer we leave it, there are simply going to be thousands of businesses that won’t survive", she said.

Johnson, who’s understood to be now staying at Chequers after being released from hospital last Sunday, on 12 April, is believed to be among the Cabinet “doves" - those who oppose lifting the lockdown early - along with Health Secretary Matt Hancock who also contracted the coronavirus. Hancock addressed the timeframe the other day, calling to continue to try and ease the overburdened NHS and like Johnson, warning about a highly probable second wave of the epidemic.

The Cabinet “hawks”, on the contrary, support an early end to the lockdown, voicing concerns about a long-drawn out shutdown of the British economy.

These include Chancellor Rishi Sunak, Liz Truss, the Trade Secretary, and Chancellor of the Duchy of Lancaster Michael Gove, with Foreign Secretary Dominic Raab, Education Secretary Gavin Williamson and Alok Sharma, in charge of business and industrial strategies, straddling the fence.

Johnson is particularly concerned a second wave could leave the country on its knees, both in terms of national health and economy.

What Will Loosening of Lockdown Bring About?

As per the latest information from the Scientific Advisory Group for Emergencies (SAGE), the loosening of lockdown restrictions cannot be done without boosting the transmission risk - known as R.

“The scientists are very clear, there's no loosening of measures we can do that won't bring the R back over 1", a cabinet source told The Guardian, further admitting there may be some “small changes on their own that could do it.”

“But the question is whether behaviours change in other ways and push the R above 1. The second you have the R above 1 then you're back to exponential growth", the MP warned.

The debate comes as the latest figures have shown a decrease in the number of coronavirus-infected patients. Yesterday the British government announced 449 more coronavirus deaths on its website - the fewest since 5 April, taking Britain's total death toll to 16,509, as of 5 p.m. on 19 April. Some 4,676 more people have tested positive for the virus, taking the total tally across the nation to 124,743.