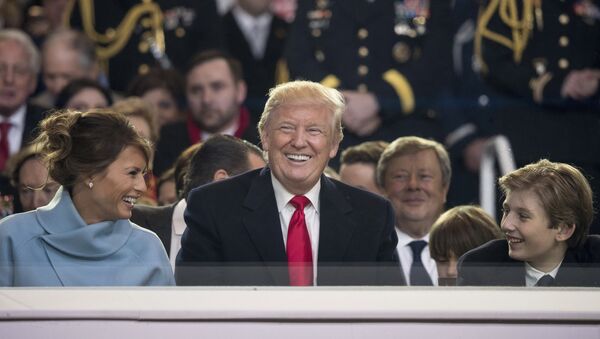 Trump's video tweet comes after Obama released a video of his own, in which the ex-president endorsed Biden and criticized the current US head of state over the coronavirus pandemic response.

It seems that the Twitter antics of US President Donald Trump have once again managed to stir up the online crowd as the current resident of the White House has delivered a fresh meme broadside against Democratic presidential hopeful Joe Biden and former US head of state Barack Obama.

As the New York Post points out, the video tweeted by Trump appears to be a “takeoff on an Allstate Insurance spot”, with the original clip featuring “spokesman Dennis Haysbert watching a college basketball game with friends when one of his commercials for the insurance company airs”.

​The vid shared by the US president, however, shows a deepfake version of Obama watching the game when it gets interrupted not by a commercial but by a real footage of one of Biden's speeches from 2017 where the latter describes how, when he was a lifeguard, kids used to rub his leg to watch his “hair come back up again.”

As the speech goes on, other people in the room look at “Obama” with concern, with the latter simply saying “What?” in response.

This social media jab comes after Obama released a video of his own last week, endorsing Biden and criticizing Trump's handling of the COVID-19 pandemic.

The president's tweet attracted quite a few netizens, some of whom didn't seem to think too highly of Biden.

This is the best ad yet. Anyone would be embarrassed to be associated with a Creep like Joe Biden.

Spit it out @JoeBiden pic.twitter.com/J1Dm390tWI

Others, however, reserved their criticism for Trump instead.

Obama lives in your head rent free. You are a pathetic sack of feces.

People are dying. DO YOUR JOB! pic.twitter.com/fHscoxOTZ6