'We Take Over Denmark': Church Vandalised in Migrant-Heavy Town Outside Copenhagen 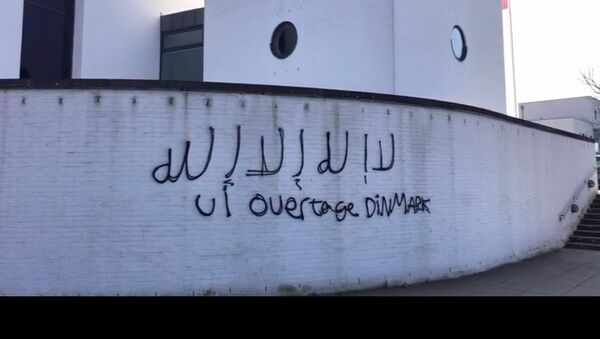 The perpetrator also wrote “There is no God but Allah”, yet managed to spell Denmark wrong.

Vejleå church in the town of Ishøj outside Copenhagen has been vandalised with spray paint, the police reported.

According to Presse Photos, the culprit wrote “There is no God but Allah” in Arabic and added “We take over Denmark” in Danish. Characteristically, Denmark was spelt with an error.

According to the Danish police, the perpetrator was caught in the act by a surveillance camera, and the act of vandalism was interrupted by a passing car.

The police characterised the culprit as “wearing dark clothes” and asked the public for further leads.

“We have surveillance pictures in the case, but based on them even the gender of the perpetrator cannot be determined, and therefore it does not make sense to publish the pictures. But the case is still at an early stage and we hope that through this investigation as well as interrogations and other investigations we can arrest the perpetrator,” Deputy Police Inspector Peter Malmose told TV2, adding that the investigation followed several different tracks.

On social media and in comments sections, many reacted with disbelief, adding that spelling Denmark wrong was impossible even with a poor command of the language.

“Even my son aged 0 could spell it,” a user noted on Instagram.

With 40 percent of Ishøj's population being immigrants or their descendants, it is Denmark's most immigrant-saturated municipality. In late 2019, wholly 67 percent of children in Ishøj were born to immigrant families, the newspaper Finans reported. Former Mayor Ole Bjørstorp described the community of 20,000, located 20 kilometres from Copenhagen, as a “charming, diversified, versatile and thriving municipality”.

In recent years, several incidents of defaced churches were recorded in neighbouring Sweden, including inscriptions such as "Allahu Akbar" and "Jihad".