Footballers in Limbo: The English Premier League Players Who Don't Know if They are Coming or Going 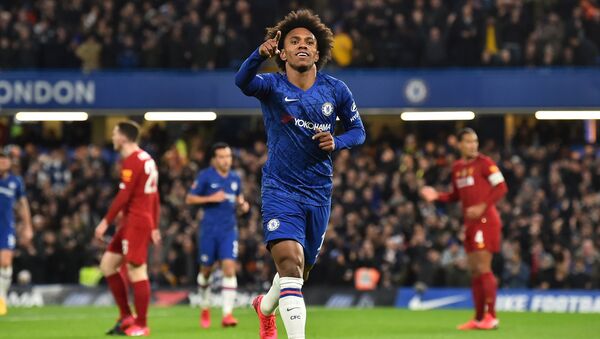 © AFP 2021 / GLYN KIRK
Subscribe
English Premier League clubs are still determined to finish the 2019/2020 season despite the continuing coronavirus lockdown. But dozens of players in the top echelon of English football have contracts which expire on 30 June. What will they do?

English Premier League clubs are still determined to finish the 2019/2020 season despite the continuing coronavirus lockdown. But dozens of players in the top echelon of English football have contracts which expire on 30 June. What will they do?

On Friday, 17 April, executives from the 20 English Premier League clubs held a virtual meeting and rejected a suggestion that the final league table should be based on the current standings if no more games were possible before 30 June.

Instead they said their aspiration was to restart the season on 8 June if social distancing rules have been relaxed by that date.

There are 92 remaining fixtures and although the Premier League title is already virtually decided - Liverpool being 25 points clear of their nearest challengers - the Champions’ League spots and the three relegation places are still up for grabs.

But attention has focused on a number of players whose contracts are due to expire on 30 June and would ordinarily have been transferred during the close season.

So who are these footballers left in limbo?

The Brazilian midfielder Willian, who will turn 31 in August, has not been offered a new contract by Chelsea manager Frank Lampard, who is keen to bring through a new generation of young players, like Mason Mount and Billy Gilmour.

Willian has not played since 8 March when he scored a goal in Chelsea’s 4-0 victory against Everton at Stamford Bridge. Three days later his team-mate Callum Hudson-Odoi tested positive for the coronavirus.

On Friday, 17 April, Willian said he was wary about playing even behind closed doors: “If we restart playing without fans but there's contact on the pitch...maybe we can spread the virus between us. It's not a bad idea but they have to know very carefully what's going to happen. Maybe a player can have the virus and we play against each other, you know?”

Willian, who joined Chelsea from Anzhi Makhachkala in 2013, is thought to be wanted by his former boss Jose Mourinho, who is now at Tottenham, and also by Newcastle United, who have just been taken over by a Saudi-led consortium.

When Mourinho took over as Tottenham manager in November he managed to persuade Belgian international defender Toby Alderweireld to sign a new contract.

​But he was unable to persuade his compatriot and team-mate Vertonghen to sign on the dotted line and it is expected the Belgian will follow Christian Eriksen out of the door.

Vertonghen, who turns 33 later this week, is reportedly be interested in a free transfer to Ajax Amsterdam, where he would be a calming and mature influence on an exciting young team.

If, as expected, Adam Lallana leave Anfield at the end of June he will be leaving on a high.

Lallana, who joined Liverpool for £25 million from Southampton in 2014, has only played 13 games for The Reds this season but is set to win a Premier League champion winner’s medal to put in his trophy cabinet.

If this season was Lallana's last hurrah in an #LFC shirt, he can walk away with his head held high https://t.co/Hi21Da27TO

​Lallana - who despite his exotic surname was born in St Albans - has been linked with a move to Leicester City, where he would link up with former Liverpool boss Brendan Rodgers who brought him to Anfield in the first place.

Scotsman Ryan Fraser had a fantastic season in 2018/19 and was one of the best performers in the Premier League.

He scored seven goals from midfield and provided 14 goal assists - better than any other player except Chelsea star Eden Hazard.

​But this season Fraser, like his club Bournemouth, has gone off the boil with only one goal and four assists.

Fraser though, is only 26, and could come good again at another club.

Last summer he was heavily linked with Arsenal, but don’t rule out a return to his native Scotland where he could become a key player for Celtic or their Glasgow rivals, Rangers.

A lot of water has passed under the bridge since striker Andy Carroll signed for Liverpool for a shocking fee of £35 million in 2011.

Carroll, who had just won his first England cap, was meant to replace Fernando Torres, who had moved to Chelsea for £50 million on the same day, but he scored only six goals in 44 appearances for The Reds.

Next stop was West Ham where, after a promising start, he was plagued with injury and never regained his top form.

Morning, it’s eight years since this goal from Andy Carroll against Everton at Wembley in the FA Cup semi-final

​Carroll spent seven years at West Ham but scored only 33 goals in 126 appearances.

Last summer Newcastle boss Steve Bruce, given a miserly budget by club chairman Mike Ashley, decided to take a chance on Carroll and signed him on a free transfer.

But he has failed to score and is almost certain to be released in the summer.

It is difficult to see a Premier League future for him but he may be offered a place in Major League Soccer in the United States.

Everton’s Senegalese international striker Oumar Niasse is another player who has failed to reach his potential in the Premier League.

With 19 goals in 41 games for Lokomotiv, he's surely been one of the best strikers in recent years, but after Everton he just didn't live up to expectations.

​After scoring 102 goals in the Senegalese league he won a move to Europe and was prolific in Turkey and with Lokomotiv Moscow in Russia.

In January 2016 Everton manager Roberto Martinez signed him on a four-year contract but when he left the club in May the new boss, Ronald Koeman, froze Niasse out and did not even give him a squad number.

Niasse was loaned out to Hull City in 2017 and Cardiff City in 2019 but was unable to save either club from relegation.

Now 30, Niasse is expected to try and resurrect his career in Russia or Turkey.