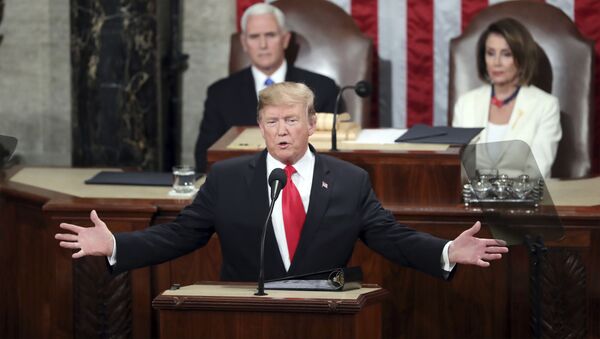 Legislation which would provide loans for small business' suffering from the economic crash caused by the coronavius pandemic, which has thrown millions of Americans out of work, has been held up in Congress as Democratic representatives push for further and more expansive funding.

US President Donald Trump has claimed that Democratic House Speaker Nancy Pelosi will be 'overthrown' during the coronavirus crisis after she launched criticism against his national leadership.

Describing the speaker as 'Nervous Nancy' and a "dumb' person in a tweet on Sunday, the president alleged that her tenure could come to an end either from 'inside or out'.

He linked his message to another tweet from the Republican Party accusing Pelosi of playing politics by delaying increased funding for a loan program for small businesses impacted by the coronavirus pandemic.

The president also launched an attack against Fox News Sunday, describing them as on a "bad path".

Nervous Nancy is an inherently “dumb” person. She wasted all of her time on the Impeachment Hoax. She will be overthrown, either by inside or out, just like her last time as “Speaker”. Wallace & @FoxNews are on a bad path, watch! https://t.co/nkEj5YeRjb

​The tweet follows an appearance by Pelosi on “Fox News Sunday” - her first since 2017 - where she said she would give Trump an “F” for his “weak” leadership in response to the coronavirus outbreak.

She attacked the president for refusing to "take responsibility" and placing the blame "on others”, while speaking to host Chris Wallace.

The #CoronavirusLiar refuses to take responsibility for blowing America's response to a deadly contagion.

That makes him weak, just like @SpeakerPelosi wisely pointed out on Fox News Sunday.

​Pelosi told Wallace that she believes that an agreement will be made in Congress regarding the refunding of the small business loan program that dried up last week.

The speaker launched an impeachment inquiry into Trump in September 2019 over allegations that he tried to pressure the Ukrainian government into investigating corruption accusations against presumptive Democratic nominee - Vice President Joe Biden.

Biden is alleged to have used his position at the head of government to aid his son Hunter to the board of Burisima Holdings and later removing a Prosecutor General of Ukraine investigating the affair.

Pelosi previously held the position of speaker until 2011, when Republicans won a majority in the 2010 midterm elections.