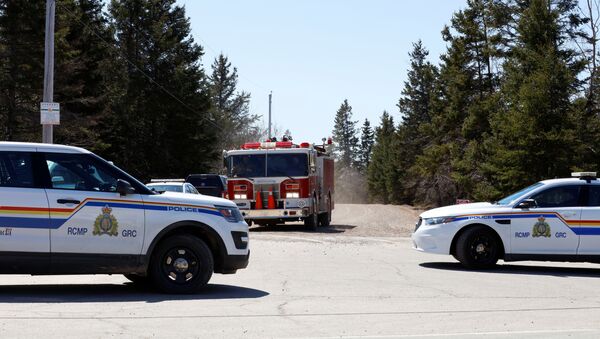 © REUTERS / JOHN MORRIS
Subscribe
The death toll from the Nova Scotia massacre has surpassed that of the 1989 mass shooting in Montreal, making it the deadliest attack in the history of Canada.

A gunman killed at least 16 people, including one federal police officer, during a shooting rampage that spanned two days in the Canadian maritime province of Nova Scotia.

The suspect, who was later identified as 51-year-old denture-maker Gabriel Wortman, has also been neutralised following an hours-long manhunt.

The Royal Canadian Mounted Police (RCMP) stated during a press-conference that Wortman used a mock RCMP uniform and squad car to carry out several murders and set fires at multiple scenes across the province.

Chief Superintendent Chris Leather said that the use of such equipment suggests that the rampage was premeditated, adding, however, that some of the victims did not have a relationship with the assailant.

#Colchester: Gabriel Wortman may be driving what appears to be an RCMP vehicle & may be wearing an RCMP uniform. There's 1 difference btwn his car and our RCMP vehicles: the car #. The suspect's car is 28B11, behind rear passenger window. If you see 28B11 call 911 immediately. pic.twitter.com/yyeOeBt8Ui

Nova Scotia RCMP Commanding Officer, Assistant Commissioner Lee Bergerman said that a 23-year veteran of the force, Heidi Stevenson, was killed in the line of duty responding to an active shooter situation. Another responding officer suffered a non-life-threatening injury and is recovering.

Shortly after the news broke, Canadian Prime Minister Justin Trudeau offered his condolences to the victims of the shooting, while praising law enforcement officers for their swift response.

Our hearts go out to everyone affected by the shooting in Nova Scotia. To the Portapique community, we’re keeping all of you in our thoughts. And on behalf of all Canadians, I want you to know that we’re here for you - and we’ll be here for you in the days and weeks ahead.

According to the Chief Superintendent, the investigation is in its early stages and the perpetrator's motives are yet to be determined.

The Nova Scotia massacre was the worst of its kind in Canada since a gunman killed 14 women in Montreal's École Polytechnique in December 1989.

000000
Popular comments
Suspect Taken into custody? Why wasn’t he shot on sight? GKW
20 April 2020, 00:43 GMT1
000000
Canada is becoming more like the US , a land of guns and money . Such a beautiful country , nesting closely to the USA , had no choice but to catch the American virus of Capitalism oozing out the entrails of profit , dividends and money .