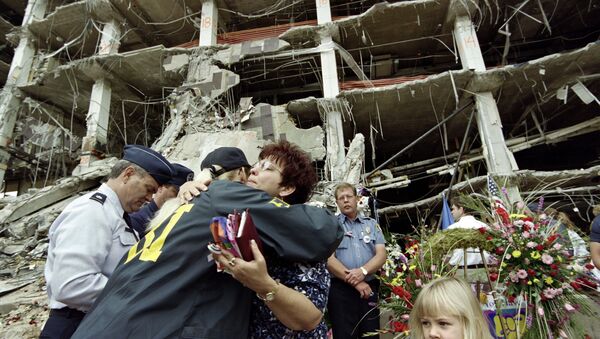 Chris Summers
All materialsWrite to the author
On 19 April 1995 white supremacist and gun rights supporter Timothy McVeigh parked a rented van outside the Alfred P. Murrah Federal Building in Oklahoma City. Moments after he locked it up and walked off, it exploded killing 168 people, including 19 children. But what was his motivation and who else was involved?

Sunday, 19 April, is the 25th anniversary of the Oklahoma City bombing but the event will not be marked by the usual ceremony at the city's memorial because of the coronavirus lockdown in the United States.

When the 6,000-pound bomb went off it registered 3.0 on the Richter Scale and was heard 30 miles away.

An angry and ominous letter to the editor was printed in the Lockport Union Sun and Journal on Feb. 11, 1992. It was written by Timothy McVeigh. This is the first part of a series by the Buffalo News in New York, where McVeigh was from. https://t.co/Lqk0RsYpfi

​The explosion blew a huge hole in the side of the federal building - which housed a daycare centre as well as numerous US government offices - and several floors of the building collapsed.

At the time it was the worst terrorist attack in the US, with a death toll far exceeding a bomb which went off at New York's LaGuardia Airport in 1975.

It later emerged that around 100 of the 168 who died probably would have survived if the building had been designed with reinforced columns to withstand an earthquake. But because Oklahoma is not prone to quakes, the architect had not seen the need for such reinforcement.

The bomber, Timothy McVeigh, who was stopped by a highway patrolman as he drove his getaway car towards Kansas, was wearing a t-shirt which was emblazoned with Sic Semper Tyrannis (Thus Always to Tyrants), which were the words uttered by Abraham Lincoln’s assassin before the President was shot in 1865.

But initially the mainstream media pointed the finger at ​Islamists.

McVeigh would later be convicted under federal law of the murder of eight FBI agents who died in the bombing - and was executed, aged 33, in June 2001.

Two months later al-Qaeda* took terrorism to the next level and the death toll of more than 3,000 on 9/11 dwarfed Oklahoma City and made jihadists, rather than white supremacists, the number one enemy of the US government.

McVeigh was portrayed at the time as a “lone wolf” but he had accomplices and some conspiracy theorists believe he was part of a larger white supremacist network.

His closest associate was Terry Nichols who, in 1997, was convicted of the manslaughter of the same eight FBI agents and was sentenced to life without parole.

McVeigh and Nichols - who had both served in the US military - shared a hatred for African-Americans and affirmative action, as well as a love of guns and the Second Amendment and a suspicion of the federal government.

In 1995 the federal government’s stock was low. Three years earlier an FBI sniper, Lon Horiuchi, had mistakenly killed an innocent woman during the 11-day siege at Ruby Ridge and in 1993 the ATF bungled another siege at Waco, leading to the deaths of 82 followers of the Branch Davidian cult.

At the time of the attack, the antigovernment movement was closely aligned with the white supremacist movement. Timothy McVeigh, who was later convicted alongside Terry Nichols for their roles in the attack, had read The Turner Diaries, a racist novel. pic.twitter.com/aam0RY9CnS

​McVeigh, Nichols and a third man, Michael Fortier, all feared and loathed the federal government and President Bill Clinton, who they considered a tyrant.

Fortier, who is now 51, would later testify against McVeigh and was given a lighter sentence - only 12 years - for failing to report the bombing conspiracy.

He was given a new identity when he left prison in 2006 and is believed to be in the witness protection program.

This is an incredibly significant stretch of days in history:

​Considering McVeigh’s overt hatred of the federal government it was a major surprise when in 2007 Nichols gave an affidavit which he claimed McVeigh had conspired with a high-ranking FBI official.

Nichols, who is now 65, wrote: "There are two individuals who I believe to have been co-conspirators….One was acting as a government provocateur. The other was a high-ranking federal government official. I believe both men are now being protected by the federal government in a cover up to escape its responsibility for the loss of life in Oklahoma."

Nichols, from his cell in a supermax prison in Colorado, then discussed an incident in January 1995: “McVeigh was extremely upset and angry. There, in what I believe was an accidental slip of the tongue, McVeigh revealed the identity of a high-ranking FBI official who was was apparently directing McVeigh in the bomb plot.”

Nichols went on to claim the name McVeigh let slip was Larry Potts, the lead FBI agent at Ruby Ridge.

Potts told The Oklahoman newspaper: "It's just nonsense and ridiculous. I can't tell you how horrible it has made me feel all day to have my name associated with that. I keep thinking about survivors and the families of those who lost people in that tragedy, that they have to be exposed to this kind of stuff from a guy like Nichols who was the cause of it."

Nichols’ affidavit followed a meeting he had in prison with Dana Rohrbacher, a Republican Congressman from California, who was leading an investigation for Congress’s International Relations Committee, into whether there was any foreign involvement in the Oklahoma City bombing.

The Oklahoma City Bombing: 25 Years Later: A quarter-century after the homegrown terrorist bombing of the Alfred P. Murrah Federal Building claimed the lives of 168 people, a retired FBI agent reflects on that tragic day and how it helped shape the Bureau https://t.co/zapXiV5USk

​Rohrbacher was particularly interested in Nichols' frequent trips to the Philippines in the run-up to the bombing.

Nichols' wife, Marife, was from the Philippines but he travelled there several times without there and one occasion was believed to be in Manila at the same time as Ramzi Yousef, the mastermind of the 1993 World Trade Center bombing.

Over $300 million was donated for the Oklahoma City bombing

One popular conspiracy theory is that Yousef and al-Qaeda gave Nichols the bombmaking training he needed and he passed it on to McVeigh.

They point out Yousef also hid his bomb in a Ryder rental truck under the World Trade Center in New York in February 1993 and also point that McVeigh tried to drive his van into the car park under the Alfred P. Murrah building, before realising it was too tall.

Domestic terrorists killed 31 last year. Threats from have continued to evolve since the Oklahoma City bombing,” the bulletin added, pointing to “perceptions” of government “overreach,” reactions to immigration policies, and the advocacy for “the superiority of the white race." https://t.co/1aozXFD1La

Rohrbacher’s report pointed out Yousef’s phone records showed that in early 1993 he called a Filipina neighbour and close friend of Nichols’ in-laws in Queens, New York.

"The opportunity for interaction between American terrorist, Nichols, and al-Qaeda terrorist, Yousef, is evident," wrote Rohrbacher, who also investigated allegations that McVeigh and Nichols had an accomplice called Hussain al-Hussaini, a former Iraqi soldier who harboured a grudge against the US government because of the first Gulf War.

Rohrbacher’s report also investigated theories linking McVeigh to Andreas Steinmeir, a German who lived for a time at Elohim City, a white supremacist community in Oklahoma. Steinmeir was a member of the Aryan Republican Army.

The Muslim community never received any kind of apology for our targeting. But it is in times of hardship and crisis that love and friendship shines the brightest. Oklahoma has one of the strongest interfaith communities in the country. @ImadSEnchassi https://t.co/cowjXZraZf

​McVeigh often referred to his friend "Andy the German" and there is evidence he tried to call him two weeks before the Oklahoma City bombing.

An ATF agent, Carol Howe, went undercover in Elohim City and dated Steinmeir between 1994 and January 1995. She later claimed he discussed bombings and frequently called for direct action against the federal government.

After the bombing Steinmeir moved to North Carolina and moved back to Germany in 1996.

Germaine Johnston received a survivor tree sapling in 1996, a year after surviving the Oklahoma City bombing. Look at it now 💚 @kfor pic.twitter.com/179FCOh3mj

​In his final report Rohrbacher, who stepped down in 2019, concluded: "We have found no conclusive evidence of a foreign connection, but there remain questions that need to be answered before this final chapter can justifiably be closed. This investigation determined that many pieces of so-called evidence backing various theories of a foreign involvement were not based in fact."

Rohrbacher admitted the sub-committee’s own research was “inconclusive” but he called for more investigations into Hussaini and Strassmeir as well as the possible phone calls between Yousef and Nichols.

Rohrbacher also concluded: “The sub-committee investigators are dismayed that there remains a lack of willingness by the Department of Justice and others to examine certain legitimate issues.”

White supremacists and those who are deeply suspicious of the federal government have not gone away since McVeigh was executed in 2001. 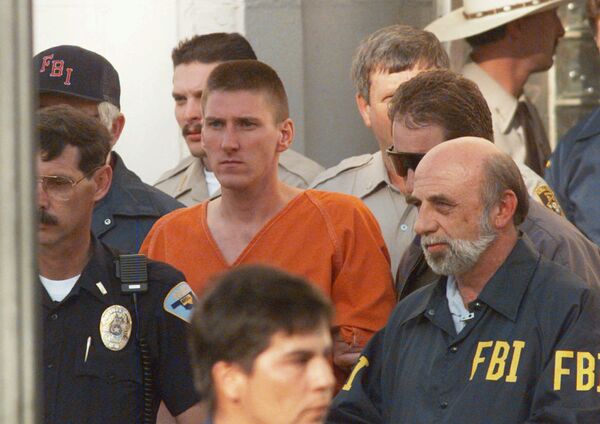 The Southern Poverty Law Center says many white supremacists, emboldened by some of the rhetoric used by Donald Trump during the 2016 presidential election campaign, have raised their profile and taken part in marches and other demonstrations.

The SPLC says it has also seen an upsurge in interest in McVeigh, who is seen as some sort of martyr to some.

​Jeremy Christian, who shouted Islamophobic insults before stabbing two people to death on a train in Portland, Oregon, in 2017, was found to have posted on Facebook a month earlier: “May all the Gods Bless Timothy McVeigh - a TRUE PATRIOT!!!”

Clark McCauley, a research professor of psychology at Bryn Mawr College in Pennsylvania, told the SPLC: "McVeigh is a symbol of resistance and a hero for those who hate and fear the US government. This includes a wide range of people, some who see themselves as neo-Nazis and some who do not."

The SPLC published a report last month which found "white nationalist hate groups" in the US had increased by 55 percent since Trump had taken office and claimed they were driven by "a deep fear of demographic change."