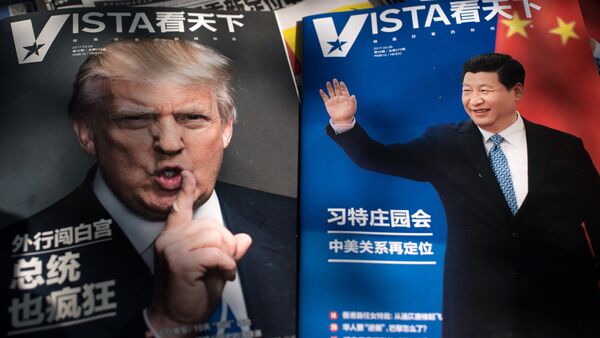 © AFP 2021 / NICOLAS ASFOURI
Subscribe
Ekaterina Blinova
All materialsWrite to the author
Donald Trump is scapegoating China to divert the American public's attention from the US' unpreparedness for the coronavirus pandemic, says American peace activist Jan R. Weinberg, who cited the worrisome operations of the US Indo-Pacific Command in the South China Sea and the US' heightened bellicose rhetoric against Beijing.

The US is ramping up rhetoric against China: following Donald Trump's claim that the People's Republic deliberately hid the extent of the COVID-19 outbreak, the American media has started to spin a story that the novel coronavirus originated in a virology laboratory in Wuhan, Hubei Province. China has vehemently denied these allegations, stressing that there is no scientific evidence to back the claim that COVID-19 was made in or leaked from a laboratory.

The US president has repeatedly underscored that COVID-19 came from China, calling it a "Chinese Virus" which, according to The Hill, had a detrimental side effect as it triggered xenophobia and racially charged incidents against Asian Americans. The US has become the hardest hit country in the pandemic in terms of both confirmed COVID-19 cases and coronavirus-related deaths, with over 700,000 infected and more than 37,000 deceased.

Why the Source of the Pandemic is 'Irrelevant'

The Trump administration has signalled that it is examining unverified reports that the highly contagious virus' spread started in the Wuhan Institute of Virology (WIV), citing, in particular, two 2018 diplomatic cables warning about inadequate biosecurity at the lab. However, BBC's science editor Paul Rincon threw the assumption into question, analysing both the cables and WIV's biosafety levels and recalling how the US military accidentally shipped live anthrax samples to nine labs across the country as well as a military base in South Korea.

The world still knows little about the sources of the pandemic, "but this is irrelevant", says Jan R. Weinberg, an American peace activist and founder of 'Show Up! America', an independent organisation aimed at educating people and promoting civic engagement. What is relevant, the activist emphasises, is that "the US government has not prepared for contingencies and they don't think things through".

While Trump and his supporters are deflecting blame for the US coronavirus crisis towards China, the pandemic "is going to expose more and more how the US government failed to plan for contingencies", according to Weinberg. 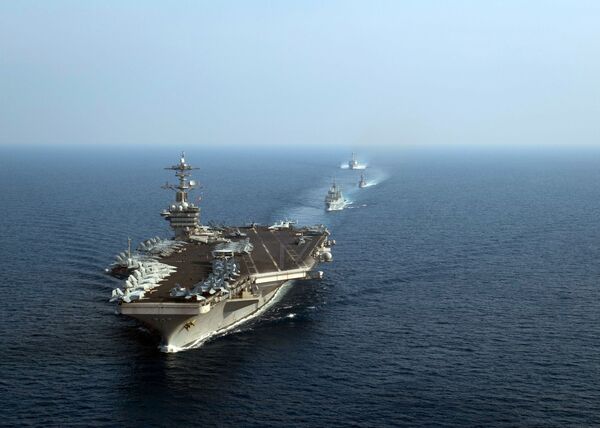 This US Navy photo obtained April 11, 2018 shows The aircraft carrier USS Theodore Roosevelt (CVN 71) leading a formation of US and Republic of Singapore navy ships during a photo exercise in the South China Sea on April 6, 2018
© AFP 2021 / ANTHONY J. RIVERA

US Continues to Tease the Dragon in the South China Sea

He drew attention to the fact that the US Indo-Pacific Command (USINDOPACOM) is continuing to flex its muscles in the disputed waters of the South China Sea regardless of the COVID-19 pandemic.

When China was engulfed by the disease, the USINDOPACOM conducted FONOP operations in the region near the Spratly Islands, which China claims, on 25 January. On March 10, it did so near the Paracel Islands, currently controlled by the People's Republic. These operations have been repeatedly subjected to criticism by Beijing, which sees them as a challenge to the country's sovereignty.

"Daily I go to the USINDOPACOM's Twitter feed and look at the messages they are sending out and every day they are involved in military exercises in the South China Sea which is absolutely outrageous because those military exercises appear to be preparations for potential war with North Korea and China," the activist says.

The 3 April incident involving a Chinese maritime surveillance vessel and a Vietnamese fishing boat which resulted in the sinking of the latter prompted a storm of criticism from the US State Department.

The White House pinned the blame on Beijing accusing it of "assert[ing] unlawful maritime claims" and "exploiting the distraction or vulnerability of other states" amid the coronavirus outbreak. The People's Republic refuted the accusations by saying that the Vietnamese boat entered the China-claimed exclusive economic zone (EEZ) around the Paracels illegally, refused to leave and then rammed the coast guard ship. Since then the incident has been repeatedly cited by the US media, which insists that Beijing has advanced the claims in the South China Sea under the smokescreen of the COVID-19 pandemic. 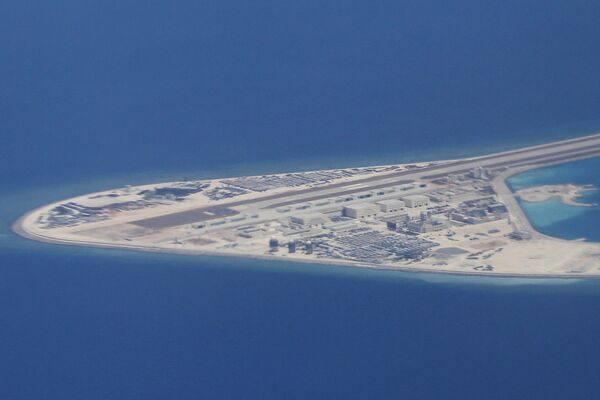 Chinese structures and an airstrip on the man-made Subi Reef at the Spratly group of islands in the South China Sea are seen from a Philippine Air Force C-130 transport plane of the Philippine Air Force, Friday, April 21, 2017
© AP Photo / Francis Malasig/Pool Photo

Weinberg stresses that "this is not just Donald Trump, Barack Obama was the same exact way" with NATO expansion in Europe and Asia Pacific against Russia and China, respectively.

The continuation of this trend is hardly surprising, the peace activist underscores: the US arms lobby is in a good position to influence the State Department and the US Congress, given the number of ex-defence contractor CEOs serving in various government institutions and advisory councils while former American officials at the same time are filling vacancies in the US military industrial complex.

On 16 April, Mac Thornberry, the top Republican on the House Armed Services Committee, came up with the initiative of creating an Indo-Pacific Deterrence Initiative (IPDI) and allocating $6.09 billion to counter China and bolster the military defences of the partner countries of the region in fiscal year 2021. The endeavour is a replica of the US' multi-year European Deterrence Initiative which was kicked off in June 2014 to "deter" Moscow soon after Crimea's reunification with Russia. Since 2014, the European Deterrence Initiative has "consumed" $22 billion in military training, infrastructure and rotational deployments, according to Foreign Policy.

Weinberg bemoans the fact that the US is sabre-ratting instead of "instituting a plan where the militaries of China, Russia and the US, all three, work together only for humanitarian aid and put a new plan together" amid the COVID-19 pandemic.

"This is the time the things could change in the world and I believe these other nations are willing to do that but the US is absolutely belligerent," he says. "This is a perfect time when humanity can come together but it appears as if no one in our Congress, in the Senate or in the House of Representatives or in the executive branch is prepared to do that or at least say that it would make sense."

000000
Popular comments
Not only does the pandemic exposes US unpreparedness to combat it, but, more importantly, it exposes the incompetence, ineptitude, ignorance and stupidity of the US President, Donald Trump.
Wyo dragon
18 April 2020, 17:15 GMT7
000000
The Donald, the eternal third-grade bully. First, it was the "Russians did it" and now, it's the "Chinese did it" ... saying something over and over doesn't necessarily make it true ... no matter how many believe it. ---------------------- Every time Trump falls short and that's about all the time, he resorts to bullying and belittling others ... he uses bellicose taunting and grandstanding to appear superior while the only thing clear as daylight is his inferiority. Trump is a mean-spirited small being with an equally limited vocabulary that keep repeating his sentences in an effort to make an impression. He became the master of name-calling ... it's true that we live in an era of smart phones and stupid people ...
Elsa JV
18 April 2020, 22:54 GMT3
000000
Newsfeed
0
New firstOld first
loader
LIVE
Заголовок открываемого материала
Access to the chat has been blocked for violating the rules . You will be able to participate again through:∞. If you do not agree with the blocking, please use the feedback form
The discussion is closed. You can participate in the discussion within 24 hours after the publication of the article.
To participate in the discussion
log in or register
loader
Chats
Заголовок открываемого материала
Worldwide
InternationalEnglishEnglishMundoEspañolSpanish
Europe
DeutschlandDeutschGermanFranceFrançaisFrenchΕλλάδαΕλληνικάGreekItaliaItalianoItalianČeská republikaČeštinaCzechPolskaPolskiPolishСрбиjаСрпскиSerbianLatvijaLatviešuLatvianLietuvaLietuviųLithuanianMoldovaMoldoveneascăMoldavianБеларусьБеларускiBelarusian
Transcaucasia
ԱրմենիաՀայերենArmenianАҧсныАҧсышәалаAbkhazХуссар ИрыстонИронауОssetianსაქართველოქართულიGeorgianAzərbaycanАzərbaycancaAzerbaijani
Middle East
Sputnik عربيArabicArabicTürkiyeTürkçeTurkishSputnik ایرانPersianPersianSputnik افغانستانDariDari
Central Asia
ҚазақстанҚазақ тіліKazakhКыргызстанКыргызчаKyrgyzOʻzbekistonЎзбекчаUzbekТоҷикистонТоҷикӣTajik
East & Southeast Asia
Việt NamTiếng ViệtVietnamese日本日本語Japanese俄罗斯卫星通讯社中文（简体）Chinese (simplified)俄罗斯卫星通讯社中文（繁体）Chinese (traditional)
South America
BrasilPortuguêsPortuguese
NewsfeedBreaking
05:29 GMTRussia’s Ruling Party Ahead in Parliamentary Vote With Over 48%, Election Commission Says
04:34 GMTLive Updates: UK PM Johnson to Push Joe Biden to Lift COVID-19 Travel Ban With US
04:30 GMTNot in the Mood: Golden Retriever Does Not Want to Cuddle
04:28 GMTChinese Observers Give Positive Assessment of Russian State Duma Election
03:45 GMTMusk Adds Another Joke to Joe Biden’s ‘Sleepy’ Issue, When Asked About ‘Inspiration4’ Flight
03:16 GMTKhamenei Appoints New Head of Iranian Air Force
03:16 GMTWait, Again? New Photo of Trudeau Wearing Blackface Emerges on Social Media
02:41 GMT‘Duty of Care’: Texas Doctor Performs Abortion Past 6-Week Law to Protest State’s ‘Heartbeat Bill’
02:02 GMT'Get Off Back Foot': Prince Andrew Mulls Dismissing His Legal Team Over Reputational Damage - Report
01:48 GMT'The Crown' Wins Emmy for 2021 Best Drama Series
00:53 GMTWHO Appoints Former UK Prime Minister Gordon Brown as Health Financing Ambassador
00:45 GMTIran Says Ready to Sell Fuel to Lebanese Gov't After Hezbollah Secured Emergency Supplies - Report
00:38 GMTVideos: Volcano Eruption on Spanish Island of La Palma Forces 5,000 to Evacuate
00:25 GMTNetanyahu on Facebook Mocks Biden’s Alleged Nap During Talks With Israeli PM Naftali Bennet
Yesterday‘Crisis Crisis’: Trump Says US Becoming ‘Cesspool of Humanity’ Over Border Situation
YesterdayFBI: Human Remains Found in Wyoming 'Consistent With Description' of Missing Gabby Petito
YesterdayFrance-UK Defense Minister Meeting Canceled Over AUKUS Fracas - Report
YesterdayFrench Highliner Stops Parisians’ Hearts Crossing Seine 200 Feet Up
YesterdayUnited Russia Leads in Russian General Election With 42% of Vote
YesterdayCelebs Go Skating Host Hopes to Sign Prince Harry & Meghan Markle for the Show, Media Says