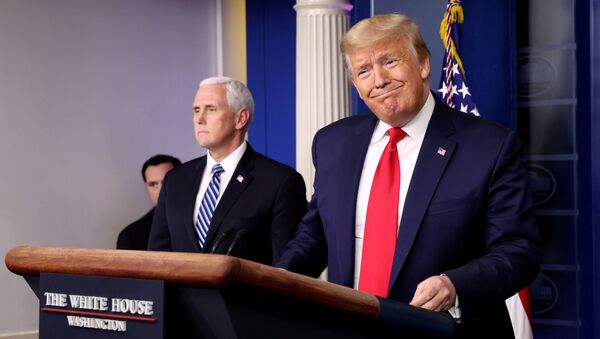 Svetlana Ekimenko
All materialsWrite to the author
As the COVID-19 pandemic has scientists working against time to develop therapies and vaccines, two theories regarding the origin of the virus have been circulating, with one pointing to a bat-origin pathogen as the source, while the other feeds into theories it was man-made and escaped from a lab.

US President Donald Trump has weighed in on claims that the COVID-19 virus escaped from a virology lab in the Chinese city of Wuhan before spreading at a slaughter market there, reports The Washington Times.

When asked by reporters at a Rose Garden briefing on his coronavirus task force on 17 April how active the investigation was into the reports regarding the origins of the virus, Trump said:

“They talk about a certain kind of bat, but that bat wasn’t in that area. If you can believe this, that’s what they’re down to now is bats. But that bat is not in that area. That bat wasn’t sold at that wet zone. It wasn’t sold there. That bat is 40 miles away.. So, a lot of strange things are happening but there is a lot of investigation going on and we are going to find out. All I can say is that wherever it came from, it came from China.’

Trump went on to address the fact that the virus, whatever form it originated in, had come from China, and that 184 countries were suffering because of it, while it “could have been solved very easily when it was just starting”.

​At the same Friday briefing, Dr. Anthony Fauchi, director of the National Institute of Allergy and Infectious Diseases, was questioned whether the virus behind the current deadly pandemic - known as SARS-CoV-2 for SARS coronavirus-2 - was “man-made” and possibly originated in a laboratory, and summarily discarded the theory. 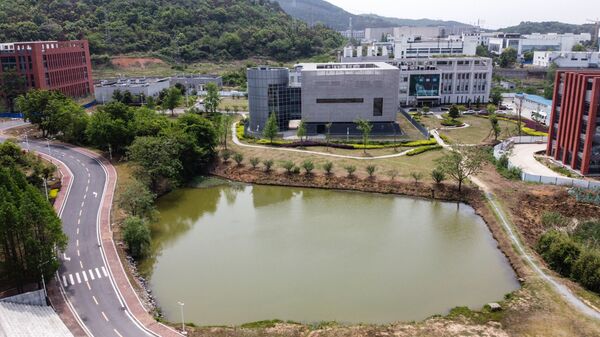 According to the scientist, a study by a group of evolutionary virologists had examined the genome sequences of the coronavirus and other bat viruses that had evolved.

“And the mutations that took to it to get where it is now are totally consistent with a jump from a species to an animal to a human,” said Fauci.

On Friday Mike Pompeo said told Fox Business News that the Chinese government and the World Health Organization failed to provide information about the virus in a timely manner “and the result of that is that we now have this global pandemic". 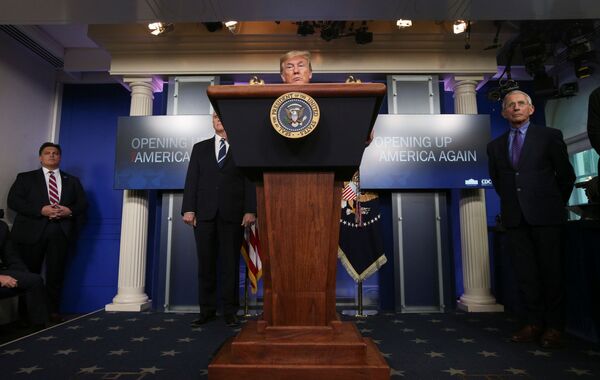 He also pointed to the Wuhan Institute of Virology as possibly withholding details about the disease.

“We are still asking the Chinese Communist Party to allow experts to get in to that virology lab so that we can determine precisely where this virus began… It’s not political. This is about science and epidemiology. We need to understand what has taken place so that we can reduce [the] risk to Americans in the days and weeks and months ahead and get the global economy back on track.”

When asked about reports that warnings were sent by US diplomats in China two years ago of flawed security at laboratories in Wuhan, Pompeo responded:

“Those are the kind of projects we’ve been engaged in, trying to help make sure that the technical know-how was available in those labs… And clearly, we need to investigate whether that took place here, whether they had the capability to handle the kinds of viruses that were being studied or worked on in that laboratory. We don’t know those answers. The Chinese Communist Party needs to open up and let us get those answers.” Army Gen. Mark Milley, chairman of the Joint Chiefs of Staff, this week confirmed that US intelligence agencies were investigating whether the virus may have originated at a Chinese laboratory.

“At this point, it’s inconclusive although the weight of evidence seems to indicate natural [origin], but we don’t know for certain,” Gen. Milley told reporters at the Pentagon.

Speculations on Origins of COVID-19

Originally, China asserted the outbreak in Wuhan was linked to a “wet” slaughter market, feeding into one of the two main theories regarding the origin of the virus.

The first is that a bat-origin pathogen infected an animal at the market and subsequently infected humans. The other rampant theory is that it leaked out of a Wuhan lab where it was being studied, with reports claiming China has conducted extensive research into bat coronaviruses.

A group of US virus experts stated in an article in Nature Medicine published on 17 March that China had previously conducted research on coronaviruses at laboratories with questionable security, insisting:

“We must therefore examine the possibility of an inadvertent laboratory release of SARS-CoV-2.”

China has consistently denied that the deadly virus behind the global pandemic originated at one of its labs, as the country’s Foreign Ministry on Thursday dismissed the damning reports, adding that WHO officials have “repeatedly stated that there is no evidence showing the virus was made in a lab”.

“Now [U.S. officials] are again hyping up the issue of origins, insinuating that the virus had something to do with the Wuhan Institute of Virology. It’s not difficult to see through their tricks which intend to muddy the waters, deflect attention and shift the blame to others,” said ministry spokesperson Zhao Lijian.