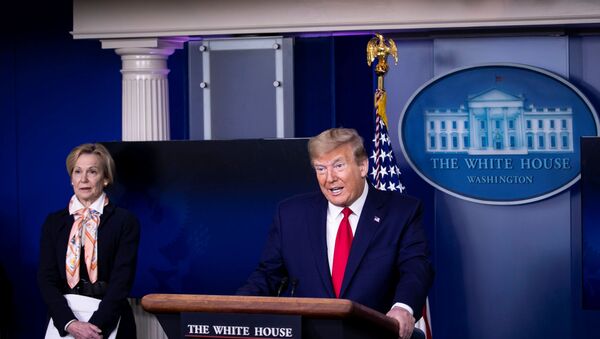 The United States remains the nation most affected by the new coronavirus disease (COVID-19), with the states of New York, New Jersey, and Michigan being the hot spots of the coronavirus infection.

President Donald Trump announced on Saturday that Montana will be lifting its COVID-19 restrictions starting on Friday, while Texas and Vermont will allow some businesses to re-open, but with certain precautions.

Trump also said he told Mexican president Andres Manuel Lopez Obrador that the US would help the country substantially with its ventilator supply.

According to Trump, the United States has carried out more coronavirus tests than any other country and has also stockpiled thousands of ventilators that it can share with other countries.

"Nationwide, we've now conducted over 4 million tests", th president said, adding "it's double the number conducted by any other country on Earth".

The US president also pointed out that as a result of a "sweeping" government response, the United States now has 10,000 ventilators stockpiled.

"We started off with a broken system", Trump said, telling reporters that "... now the rest of the world is coming to us asking if we can help them with ventilators, because they are very complicated, very expensive, they are very hard to build, and we have them coming in by the thousands".

Ventilators can be made available to US states "within hours" if governors ask for them, he added.

Trump also said the US can give Iran ventilators to help treat COVID-19 patients. The country that is among the worst hit by the COVID-19 pandemic, has repeatedly said that US sanctions have hindered Tehran's efforts to combat the spread of the coronavirus and prevented the imports of essential medical goods to respond to the pandemic.

"When I came in Iran was a terror", Trump said, adding "Iran is a much different country than it was, when I first came in, Iran was going to take over the entire Middle East, right now they just want to survive, they are having protests every week, they are loaded up with the plague, which I don't want, I've offered to help them if they want, if they need ventilators, which they do, I would send them ventilators, we have thousands of excess ventilators".

On Thursday, the US president issued new federal guidelines inviting US states to engage in a three-phase gradual reopening of the economy and society. The decision to lift restrictions will ultimately be up to state governors, some of who have said they will not start reopening their states' economies until more coronavirus tests have been conducted.

Protests have been taking place in various US states in the past days, with people calling for the lifting of lockdown measures introduced to curb the spread of COVID-19. On Saturday, a wave of protests swept across several states, including Michigan, Ohio, Texas, Kentucky and Wisconsin.

The US has so far confirmed more than 726,640 cases of COVID-19 - the highest number in the world -including at least 37,938 deaths, according to the Johns Hopkins University live-tracker.