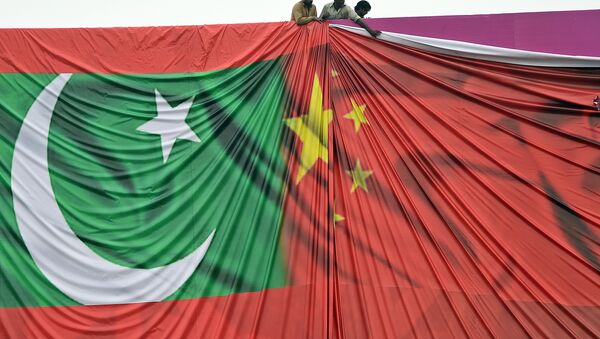 Rishikesh Kumar
All materialsWrite to the author
New Delhi (Sputnik): While China remains one of the major suppliers of defence equipment to Pakistan along with the US, in recent years, Beijing has enhanced the military capability of India’s arch rival with upgrades and supplied state-of-the-art equipment.

On 12 April, shells fired by a Pakistani weapons system damaged several houses and injured people in the Indian part of Kashmir. The ongoing firefight between the two arch-rivals started on 6 April but surprised many this time, as shells fired from the Pakistani side landed deep inside the villages of Kupwara in Indian-administered Kashmir.

A former Indian Army Brigadier and defence analyst, Rahul Bhonsle, believes that it is China which completely overhauled the capability of Pakistan and the 'China Pakistan axis' presents a formidable challenge.

“The China Pakistan axis is no doubt a major challenge for India, given the close integration of Chinese weapons systems such as tanks, combat aircraft and the sharing of technology on tactical nuclear weapons, amongst others. Pakistan in some ways has become a test lab for the Chinese weapons,” the military observer told Sputnik.

Defence trade figures published by the Stockholm International Peace Research Institute have revealed that China has solely replaced the entire fall in US-Pakistan defence trade in the past five years. China has been supplying defence equipment to Pakistan since the 1960’s and increased its share in the total Pakistani defence arsenal to around 60 percent in recent years. Besides nuclear-capable missiles, armoured capability has gained prime importance in collaboration between the two countries.

Pakistan’s capacity in terms of main battle tanks (MBT), with approximate 2,400 in the field, is said to be diverse, with three Chinese-made tanks. Pakistan's MBTs include 1,100 Al-Zarrar tanks, based on the Chinese Type 59 MBT, as well as 50 T-54/T-55, 400 Type-69 tanks, 350 Al-Khalid tanks, and the country is set to roll out Chinese-made VT-4 tanks. Pakistan is also working on a more advanced version of the al-Khalid III MBT.

“China may at times to come provide Pakistan with front line Type 99 tanks but Pakistan may not have the resources to acquire the same. Pakistan's inventory of a large mix of tanks from Al Zarrar to Khalid T-80 etc, is an outcome of a lack of funds and a mix-and-match approach, which will remain a major challenge in the future as well,” Bhonsle added.

A review of weapons classifications shows that Pakistan is militarising its skies (48 percent of total arms import) at an unprecedented rate but at the same time, armoured vehicles and artillery have constituted around 20 percent of total arms imports since 2010. It is also upgrading most of the tanks and enhancing their capability to attack any time of day, while India is playing catch-up.

“India is mainly relying now on the tried and tested T-90 S and upgraded T-72. These are versatile and have the capability to meet the challenge posed by the Pakistan armour. Gradual upgrades of these in terms of nigh fighting, fire control and armament may be the way ahead,” Bhonsle replied when asked whether the Indian Army should also diversify its tanks.

“India had a good option of developing indigenous Future Ready Combat Vehicles (FRCV) but at present there are no current developments that are known. While upgrading the current generation on the fly for enhanced capabilities, India may also look at the Russian Armata in case it is not serious about the FRCV project,” Rahul Bhonsle said, suggesting ways to improve the nation's armoured capability.

India has approximately 3,300 main battle tanks: 1,900 T-72M1, 1,000 T-90S, and around 500 T-90SM. The Indian army has also inducted the domestically-produced Arjun MK-I but hopes to address some technical issues before rolling out a more capable version of the Arjun.

Nevertheless, Indian Army chief M. M. Naravane has indicated that country is moving away from the “military icons of the 20th century”, like tanks, fighter aircraft and primarily looking at the possible induction of laser and directed-energy weapons.

“In the five-odd decades since — in Iraq, Lebanon, Georgia, Chechnya and Syria, armoured formations have either followed, supported the application of air power and artillery, or else their units and sub-units have been committed in smaller tactical groupings as part of infantry-armour assaults in urban terrain,” Naravane said in March of this year while speaking at an event in Delhi.

In future warfare, Pakistan and China have also been working on the development of Unmanned Aerial Vehicles including the Caihong-5 and Wing Loong-I.

“Pakistan's military, despite having fewer assets, is conventionally not inferior to the Indian military. Moreover, given its inter-operability with the People’s Liberation Army, when it is offered cyber, space and Electronic Warfare support, the balance may tip in Pakistan's favour. Complacency will not help the Indian Army,” Praveen Sawhney, a former military officer and author of several books on military affairs said.

Ultimately it is the man behind the gun that is important, as was proved by the Indian Centurion who outgunned the Pakistan Patton in 1965, but “we cannot rest on past laurels;” Rahul Bhonsle, who has had a distinguished service career lasting over 30 years, concluded.

000000
Popular comments
Neither India nor Pakistan would be smart going to war with the other. The shift of Pakistan from US supplies to Chinese supplies is good not only for the country, also for the peace and stability of the entire region. The alone role of the US in the region is to promote war, with the porpose of remaining untouched as the first super-power, while other big countries like India and China fall in wars. India can move also away from contracts with the US to contracts with Russia. It would be wrong for India to follow the Turkish path, because at the time of the war, the US will not be there to help them.
eehnie
18 April 2020, 20:36 GMT1
000000
ALL endians WILL HAVE TO ACCEPT PAKISTAN AS A REALITY AND HAVE TO MERGED THEIR COUNTRY WITH PAKISTAN FOR PROSPERITY ONE DAY. ..
FANTASTIC TEA
18 April 2020, 17:03 GMT
000000
Newsfeed
0
New firstOld first
loader
LIVE
Заголовок открываемого материала
Access to the chat has been blocked for violating the rules . You will be able to participate again through:∞. If you do not agree with the blocking, please use the feedback form
The discussion is closed. You can participate in the discussion within 24 hours after the publication of the article.
To participate in the discussion
log in or register
loader
Chats
Заголовок открываемого материала
Worldwide
InternationalEnglishEnglishMundoEspañolSpanish
Europe
DeutschlandDeutschGermanFranceFrançaisFrenchΕλλάδαΕλληνικάGreekItaliaItalianoItalianČeská republikaČeštinaCzechPolskaPolskiPolishСрбиjаСрпскиSerbianLatvijaLatviešuLatvianLietuvaLietuviųLithuanianMoldovaMoldoveneascăMoldavianБеларусьБеларускiBelarusian
Transcaucasia
ԱրմենիաՀայերենArmenianАҧсныАҧсышәалаAbkhazХуссар ИрыстонИронауОssetianსაქართველოქართულიGeorgianAzərbaycanАzərbaycancaAzerbaijani
Middle East
Sputnik عربيArabicArabicTürkiyeTürkçeTurkishSputnik ایرانPersianPersianSputnik افغانستانDariDari
Central Asia
ҚазақстанҚазақ тіліKazakhКыргызстанКыргызчаKyrgyzOʻzbekistonЎзбекчаUzbekТоҷикистонТоҷикӣTajik
East & Southeast Asia
Việt NamTiếng ViệtVietnamese日本日本語Japanese俄罗斯卫星通讯社中文（简体）Chinese (simplified)俄罗斯卫星通讯社中文（繁体）Chinese (traditional)
South America
BrasilPortuguêsPortuguese
NewsfeedBreaking
04:01 GMTUS Civil Rights Leader Applauds Police Chokehold Ban, Urges Congress to Move on Floyd Act
03:55 GMT'Cut Him Off Now!': Newsmax Host Loses Cool After US Vet Critiques Trump Over Afghan Withdrawal
03:20 GMTUK High Court Rules Will of Prince Philip to Remain Sealed for 90 Years
02:31 GMTUS Coast Guard Joins Australia Navy for 3-Day Exercise in South China Sea
01:56 GMTAlex Murdaugh and The Fall of a Southern Dynasty
01:33 GMT'At the End of the Occupation' Country Faces Many Challenges - Head of Afghan National Peace Council
01:11 GMT'Human-Sized Penguin' Uncovered by New Zealand Schoolchildren Reveals Ancient Species
00:52 GMTTrump Expresses Sympathy for US Capitol Riot Suspects Ahead of September 18 Rally
YesterdayUS Approves $500Mln Military Sale to Saudi Arabia to Support Copter Fleet - Pentagon
YesterdayMinneapolis Police Department Buys ‘Not-Reaching Pouches’ to Reduce Deadly Traffic Stops
YesterdayTexas Governor Says Biden Administration Had Plans to Close Section of US-Mexico Border
YesterdayBotched FBI Probe Into Nassar Abuses Highlights ‘Endemic Failures’ Within Bureau, Former Agent Says
YesterdayTwitter Goes Bonkers After Star Batsman Virat Kohli Quits as Skipper of India's T20I Cricket Team
YesterdayHuman Hair as Pet Food? Indian Scientists Develop Unique Way to Use Keratin Waste
YesterdayBiden Retrieved on New Attack Ad Against Buttigieg Over Fears of Reprisal, Book Claims
YesterdayHow New Book About Trump Misfired, Inflicting Further Damage to Biden's DoD After Afghan Debacle
YesterdayUS Grand Jury Indicts Clinton-Linked Attorney for Making False Statements to the FBI
YesterdaySpecial Counsel Durham Allegedly Seeking to Indict Lawyer at Firm With Ties to 2016 Clinton Campaign
YesterdayOne Assassin Can Shift The Balance: Ex Lawmakers Say US Gov't Still Vulnerable to Attacks After 9/11
YesterdayPopulariser of Home Computers Sir Clive Sinclair Dies at 81