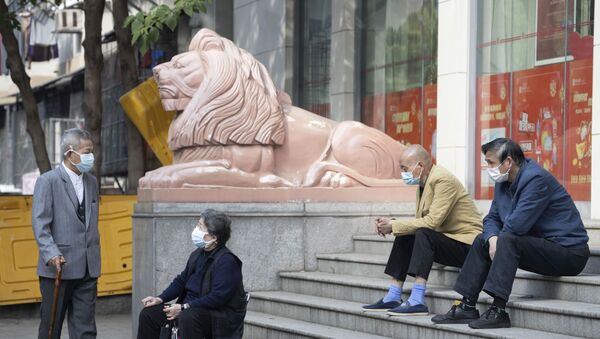 Demond Cureton
All materialsWrite to the author
A columnist writing for the Jeff Bezos-owned media publication wrote earlier this week that diplomatic cables allegedly sent to Washington under the Trump Administration in 2018 stated concerns on the Wuhan lab, despite US intelligence and scientific officials distancing itself from directly blaming Beijing for the ongoing pandemic.

US embassy officials had sent warnings back to Washington about alleged safety concerns at the Wuhan Institute of Virology (WIV), the Washington Post's Josh Rogin wrote in an opinion piece on Tuesday this week.

The visit reportedly took place in January 2018, where US science diplomats had visited the facility, with US consul general, Jamison Fouss, and embassy counsellor of environment, science, technology and health, Rich Switzer, leading the delegation, Rogin wrote.

The 19 January 2018 cable reportedly said: “During interactions with scientists at the WIV laboratory, they noted the new lab has a serious shortage of appropriately trained technicians and investigators needed to safely operate this high-containment laboratory."

The alleged cables also argued the US should provide additional support to the laboratory, citing concerns on the "dangerous" nature of the bat coronavirus research.

The column was published just days before US secretary of state, Mike Pompeo urged China to "come clean" on allegations Beijing and the World Health Organisation had mismanaged and underreported information on the coronavirus pandemic.

But the US State Department declined to comment on the report and "other details of the story", Rogin admitted. No screenshots of the cables were provided in the report.

Mr Rogin cited University of California at Berkeley research scientist, Xiao Qiang, who said that while evidence shows the COVID-19 virus was not lab engineered, it was "not the same as saying it didn't come from the lab".

He told Rogin: “The cable tells us that there have long been concerns about the possibility of the threat to public health that came from this lab’s research, if it was not being adequately conducted and protected."

Xiao Qiang also voiced similar concerns that the Chinese government refused to answer "basic questions" on the origins of the novel coronavirus pandemic and suppressed efforts to determine whether the lab was involved.

Mr Xiao is currently the director and research scientist for the Counter-Power Lab which focuses on internet freedom, and is founder and editor-in-chief for the bilingual anti-Beijing China Digital Times, based in California.

Research from the Counter-Power lab, part of Berkeley's International Computer Science Institute (ICSI), is funded by the US Department of State Bureau of Democracy, Human Rights and Labor, according to the website.

Despite WashPo's allegations, findings from a US team of researchers ruled out any possibility of infections from bats used at the Wuhan lab, due to vast differences in the genome sequencing of viral specimens at the facility.

US officials claim they briefed the Trump administration in 2018 via cables, namely to update the US intelligence community of concerns prior to the pandemic.

But US joint chiefs of staff chair, General Mark Milley said in a presser this week that the US intelligence had agreed the evidence linking COVID-19 coronavirus pandemic to the Wuhan laboratory was "inconclusive".

Pompeo, Trump to Probe China for COVID-19 'Leak' at Wuhan Lab Despite Scientists Debunking Theory
"There’s a lot of [rumour] and speculation in a wide variety of media, blog sites, etc. It should be no surprise to you that we have taken a keen interest in that, and we have had a lot of intelligence take a hard look at that", Gen Milley said at the time.

The article also cites anonymous US officials, who called the cable "a warning shot", but US officials were warned by Chinese authorities in January, according to foreign ministry spokeswoman Hua Chunying and others.

But the WashPo column asserts that cables had been circulating "over the past two months", or February, about the origins of the pandemic, a month after the Chinese foreign ministry had alerted US officials.

According to the website, the WIV hosts one core BSL-4 lab, two BSL-3 labs and 17 BSL-2 labs, with the former built after the 2003 SARS coronavirus outbreak, with strict training protocols in place.

Speaking on training protocols, a team of researchers wrote: "We designed a training program for BSL-4 laboratory users that follows local, national, and international guidelines and regulations. Our program ensures the safety and security of staff involved in research at the Wuhan BSL-4 laboratory."

Trainees are subject to numerous stages, including Pre-Assessment, Theoretical Training, Hands-On Training and Mentored On-the-Job Training, prior to receiving Final Assessment and Certification.

Biosafety accreditation is certified by the China National Accreditation Service for Conformity, alongside members of international organisations and partners, and has signed multilateral mutual recognition agreements (MRAs) with 101 international accreditation institutions across 97 countries and economies, according to a 2019 report from the Journal of Biosafety and Biosecurity.

Chinese foreign ministry spokesperson, Zhao Lijian, slammed accusations of a COVID-19 coverup in China, stating that revisions to the number of coronavirus cases in the city were a common international practice, it was reported on Friday.