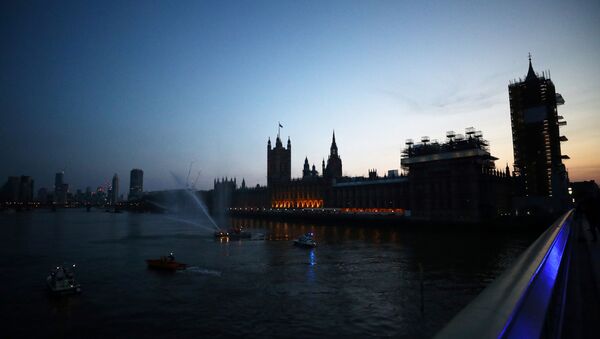 © REUTERS / HANNAH MCKAY
Subscribe
The government of the United Kingdom has introduced social distancing measures restricting the public from leaving their homes with the exception of essential travel and exercise. This has coincided with large-scale public displays of support for key workers fighting the epidemic.

The video, uploaded by Doctor Damir Rafi, shows members of the public gathered on London’s Westminster Bridge on Thursday, including young children and emergency vehicles with their sirens blazing, near St Thomas’ Hospital.

​While the demonstration was intended to show appreciation for key workers combating the coronavirus outbreak, the people congregating together were ignoring expert warnings on social distancing

Social media users were quick to point out the irony and the carelessness of the participants.

​Others expressed their frustration as the police taking part in the event.

​Some joked about filling up even larger venues such as Wembley Stadium.

​Those participating were described as "terminally stupid".

​The disproportionate responses by the police to different areas of London was also highlighted.

​The footage comes as the UK's national lockdown was extended by three weeks on Thursday. Ministers and government scientific advisers have generally praised the public for following the social distancing measures but the public has been seen defying the laws on a few occasions.

The Metropolitan Police said that it will be "reminding" its officers about the social distancing laws and London Mayor Sadiq Khan said that the police had questions to answer for it, Metro reports.

​The government has told the public to stay home with the exception of "essential travel" such as work, groceries, or for medical reasons.

Coronavirus continues to spread across the UK, reaching 103,093 confirmed cases on Friday with 13,729 deaths.

000000
Popular comments
I had no idea what was going on when I walked from my exercise walk last night. People outside of their homes clapping or banging on pans and ever fireworks. I thought it might be one of the pathetic ideas to "support" the NHS workers but they would rather have a pay rise over some pathetic and childish clapping. I still use my own brain and don't need any assistance from the Jimmy Savile TV aka BBC.