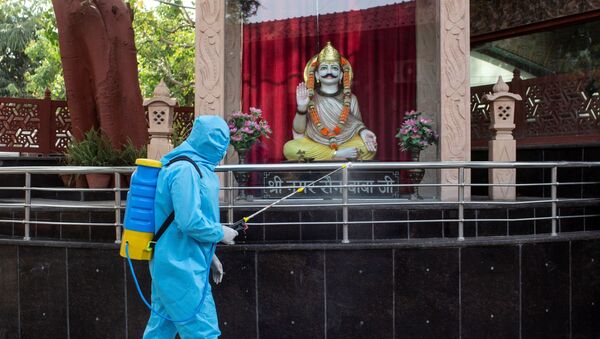 © REUTERS / DANISH SIDDIQUI
Subscribe
International
India
Africa
New Delhi (Sputnik): With the rapid increase in the number of COVID-19 cases, the Indian Government has imposed the second phase of the lockdown until 3 May. In order to combat the virus, all the top agencies in the country are working with the government to fight the pandemic.

India is preparing to deal with a nationwide spike in the number of COVID-19 cases, and the Indian Institute of Science (IISc) has designed mobile Polymerase Chain Reaction (PCR) testing vans to scale up diagnostic testing capabilities.

According to IISc, the vans are being designed so that they cut down turnaround times between sample collection and test results, which usually takes up to three days.

He further said that through molecular testing labs, technicians can run 800 samples per day.

According to him, as the pandemic spreads to the interior parts of the country that do not have access to advanced molecular diagnostic testing capabilities, there is an urgent need to build and deploy safe and accurate testing capabilities at various locations.

"With the rapid spread in Tier 2 and tier 3 cities, the van could be deployed to test samples, Gorthi said, adding that the processing and testing of the samples can't be done in the same room, as the virus' RNA needs to be isolated.

He further added thayt with the vans coming into the picture we would be saving a lot of time in shipping from collection centres to testing labs, which are less in numbers across the country.

"It is proven worldwide that the effectiveness of large scale testing in managing the growth of new cases as well as reducing mortality, especially with the early detection of asymptomatic cases," a statement from the IISc stated.

India has reported 13,387 positive COVID-19 cases while as many as 437 people have lost their lives due to the virus, as per the federal Ministry of Health and Family Welfare so far.