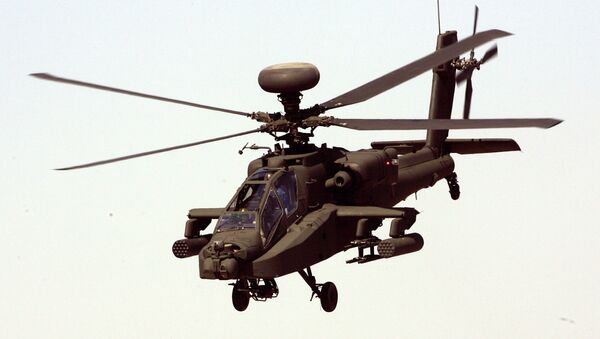 New Delhi (Sputnik): The Indian Air Force had inducted the AH-64E (I) Apache Guardian last year at Pathankot air base, which is 145 kilometres away from the border with Pakistan. Pathankot is the first line of defence against any attack from India's neighbour to the west.

An Indian Air Force (IAF) Apache helicopter-- which was inducted at a base near the Pakistan border recently- made an emergency landing in the Hoshiarpur district of Punjab on Friday. Initial reports suggest that both the pilots are safe.

Soon after the helicopter took off from the Pathankot air base, it developed a technical problem, officials said.

"Apache helicopter got airborne from Pathankot airbase. After approx 1 hr of flying had indications of a critical failure and carried out a safe landing west of Indora, Punjab. The captain of the aircraft took correct and prompt actions to recover the helicopter safely. All crew onboard the helicopter are safe and there has been no damage to any property. The aircraft will be recovered after necessary rectification", the Indian Air Force said in its statement.

IAF had inducted American Apache multi-role helicopters in 2019 to fortify its Pakistani border. The first four of 22 Boeing AH-64E Apache Guardian attack helicopters arrived in August 2019 while the rest have been coming in batches.

India had signed the $1.15 billion contract for the procurement of Apache attack helicopters with Boeing on 28 September 2015.