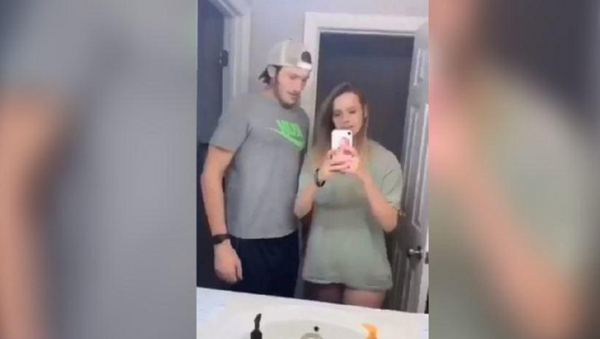 Although the 50-second clip was initially shared on TikTok on Thursday, it eventually made its way to Twitter and was widely shared by users; “Carrollton” was trending on Twitter Friday morning.

Warning: Video contains sensitive language and may not be suitable for all audiences.

​The video, which simulates a cooking video as the two students pour cups of water into a bathroom sink, shows a female and male teenager using racial slurs like the n-word and making multiple derogatory comments about black people.

“First we have ‘black,’” the female teen in the video is heard saying. The male teen then follows with: “Next we have ‘don’t have a dad.’”

The names of the students have not been officially released, although their faces are visible in the video.

According to the New York Times, Carrollton High School Principal David Brooks started an investigation into the video on Thursday, shortly after it was posted.

“It is our priority to keep our schools safe, and there is no doubt this incident has caused significant tension at Carrollton High School, across the district, state and nation – even the world,” he said in a statement.

In a statement Friday, Carrollton City Schools Superintendent Mark Albertus confirmed that the two students had been expelled, calling their behavior “unacceptable” and “not representative of the district’s respect for all people.”

“This incident does not reflect the culture of Carrollton City Schools,” Albertus added. “We are very proud of our diversity and so is our entire community. We don’t need to lose sight of this important attribute because of the actions of a few.”

School board member Gil O’Neal told the Atlanta Journal-Constitution he was appalled by the video.

“I was very surprised. I just couldn’t believe that in this day and age we’re still having to deal with these types of issues,” O’Neal said. “We are called Trojan Nation for a reason, and that is not indicative of anything that goes on in this community nor this city.”