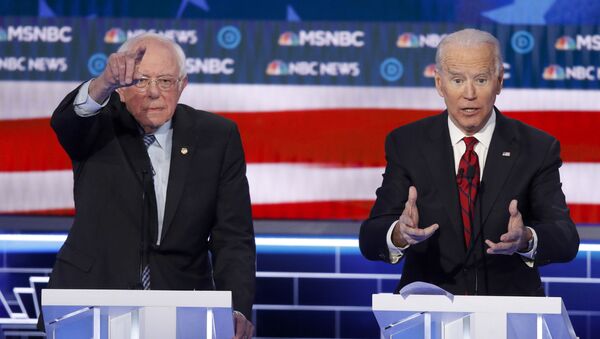 On 13 April, Vermont Senator Bernie Sanders, who had recently dropped out of the race, called upon his base to support his former rival, Joe Biden. According to American academics, Bernie's move shows that Dems have learned a lesson from their 2016 defeat.

On 8 April, Bernie Sanders suspended his campaign following a defeat in Wisconsin's Democratic presidential primary. He announced that since he was some 300 delegates behind former Vice President Joseph Biden, "the path toward victory is virtually impossible".

On Monday, the self-described democratic socialist endorsed Biden, saying that Americans need him in the White House: "I will do all that I can to see that that happens, Joe", Sanders said. In response, the former vice president noted that he was "deeply grateful" to the Vermont senator.

"You've put the interests of this nation and the need to beat Donald Trump above all else", Biden emphasised.

However, Sanders' decision prompted criticism from other progressives. For instance, Green Party leader Jill Stein expressed her bewilderment over Bernie's move: "Sanders endorses Biden - for what? No Medicare for All to solve healthcare emergency. No bailout for working people in imminent depression. No Green New Deal to save humanity", she tweeted.

Sanders endorses Biden - for what?
No Medicare for All to solve healthcare emergency.
No bailout for working people in imminent depression.
No Green New Deal to save humanity.
The Dem Party has blocked progress for too long. Time to replace it with a real party for the people. https://t.co/TGMdToxnrp

Bernie Left the Race Because He Had a Choice

Although Sanders has embraced Biden's candidacy for the nomination, "it is not clear how many votes that will mean for Biden", says Daniel P. Franklin, associate professor of political science at Georgia State University.

"There are two types of supporters in presidential primaries, those who want to nominate the candidate from their party most likely to win and those who support a particular ideology", Franklin explains. "Bernie Sanders was the head of a movement intent on creating in the United States a European style social democracy. While Sanders is the champion for now of that movement, he can and will be replaced. His support was not so much about Bernie Sanders as it was about his ideas."

According to the professor, Senator Sanders' personal endorsement "will have very little impact" since "his supporters are involved in a larger game and Biden has shown only tepid support for their ideals".

Still, Franklin underscores that Bernie left the race because "he had a choice": "He could stay in the race to promote his position on Medicare for all or he could clear the way for Joe Biden to try to beat Trump in the general election", he says.

Having no chance of getting the nomination, Bernie would have only weakened Biden if he stayed in the race and thus "enabled Trump", the academic presumes, adding that either way Sanders loses.

"At least if Biden wins and if Bernie endorses Biden, Sanders has a chance to influence policy in the new Biden Administration. Furthermore, with the immediacy of the current crisis, arguing over esoteric points like improving Obamacare versus Medicare for All takes a back seat to the importance from Bernie's perspective of beating Trump", Franklin says, adding that he means that Bernie left the race because "he had bigger fish to fry".

Dems Trying to Avoid Past Mistakes

"It seems that the Democrats learned some lessons from 2016", says Sean D. Foreman, a professor of political science at Florida-based Barry University, explaining that last time a row between Hillary Clinton and Bernie Sanders paved the way for Donald Trump to the White House.

"This time many Democrats are trying to avoid the past mistakes", the academic points out. "It helps them that Biden and Sanders already had a long time, friendly relationship. It was evident on the debate stages that they were more like buddies than enemies. Sanders was smart to end his campaign and formally endorse Biden relatively early. It removes a talking point in the media and it allows the divisions to heal earlier than usual."

He admits that it may seem odd that Sanders left when his signature issue, Medicare for all, is at the center of the policy debate. However, while this programme "is far from happening", Sanders and his supporters have already won "the philosophical debate", judging from public opinion polls in support of expanding government-funded health coverage amid the COVID-19 pandemic. According to the professor, "in some ways Sanders can claim a partial victory".

"The idea of universal health care or ‘Medicare for all’ was far out of the mainstream in the United States just four years ago", Foreman says. "Today it is at the mainstream of discussion. That's not to say there will be approval of universal health coverage, because that will depend on the makeup of the Congress. But the idea is seriously being debated now and in the context of the current health crisis we can give some credit to Senator Sanders for shaping the health care policy debate in the United States."

The next step for Sanders is to put a Democrat in the White House, according to the professor, who believes that Bernie "realises that now the best path to see his ideas move forward is by supporting Biden".

Still, the academic agrees that it is still going "to take a lot more work" to get the Sanders base of voters to go for Biden, as "fundamental differences in policy still exist".