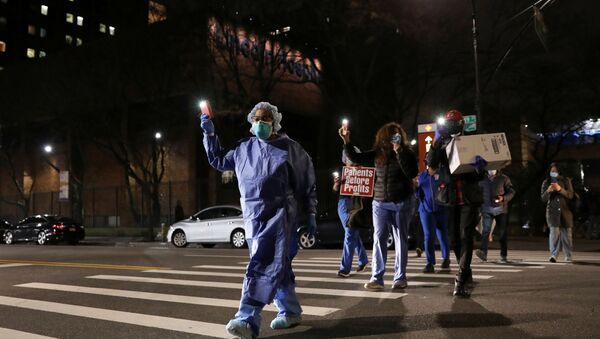 © REUTERS / CAITLIN OCHS
Subscribe
International
India
Africa
Ekaterina Blinova
All materialsWrite to the author
US President Donald Trump's decision to suspend funding for the WHO has prompted a lively debate about the organisation's role in tackling the pandemic, Washington's response to the highly contagious disease, as well as the country's spending priorities.

Donald Trump announced on Tuesday that he was halting funding to the World Health Organisation (WHO) for 60 to 90 days while his administration is inquiring about the entity's handling of the COVID-19 pandemic and its alleged cover-up of the spread of the coronavirus.

Given that US taxpayers provide between $400 million and $500 million to the organisation annually, "the United States has a duty to insist on full accountability" of the WHO's decision-making, Trump stressed. For his part, WHO Director-General Tedros Adhanom Ghebreyesus expressed regret at Trump’s intent to suspend funding, adding that the entity would seek to fill financing gaps from other donors amid the coronavirus crisis.

Not only the WHO's response to the COVID-19 pandemic but its initiatives carried out over the past decades deserve scrutiny, argues Charles Ortel, a Wall Street analyst and investigative journalist, who endorses Trump's decision to investigate the entity.

"Headquartered in one of the most expensive cities on earth, the WHO and other slush funds including the Global Fund and Unitaid, among others, have yet to account rigorously for sums approaching and possibly exceeding $100 billion sent there to the WHO starting in 2001", he says.

Ortel, who has been conducting a private inquiry into the Clinton Foundation's alleged fraud and pay-to-play schemes, specifically questions the WHO's collaboration with the charity which, according to the analyst, has neither been properly organised nor operated as a charitable entity.

The investigative journalist notes, in particular, that while the WHO lauded the Clinton HIV/AIDS Initiative's (CHAI) work, the latter maintained partnership with Ranbaxy, a firm that later pleaded guilty to seven federal criminal counts of selling adulterated drugs.

He does not rule out that some multinational entities could have used the WHO for money laundering schemes. The analyst bemoans the fact that although advanced economies have funnelled money into the WHO's initiatives over the past decades, "there is an appalling shortage of doctors, nurses, and hospital beds throughout the poorest nations on earth".

A message to ⁦@realDonaldTrump⁩ in re ⁦@WHO⁩, @GlobalFund⁩, ⁦@DrTedros⁩. On 4-22-16, #GAP writes of “an irregular and improper collusion between the Global Fund and the State Dept in Washington ... cost taxpayers hundreds of millions ... tantamount to fraud” pic.twitter.com/AvQGAX8TQ8

​"Sadly, much of [the funds] has disappeared even as accountants and consultants produced glossy studies and financial reports claiming progress, while peer-reviewed, multi-author academic papers also congratulated themselves", he presumes.

According to Ortel, Trump's reported plan to withhold up to $3 billion in aid to global health initiatives for the fiscal year 2021 as well as his administration's attempts to slash more than half of US funding for UN programmes – which were partly rejected by Congress – were prompted by a desire "to cease support for corrupt, opaque organisations, especially those that have taken aid for years, only to become voluble critics of America".

"The programmes targeted so far stand accused by many credible persons of endemic corruption", Ortel says. "We have corruption problems at home, but at least by redirecting aid flows, the Trump administration may have better control over its assistance programmes".

The analyst suggests that the US and like-minded donor nations may "band together in smaller groups to channel aid directly to those deserving nations that will reject and police corruption wherever they find it". 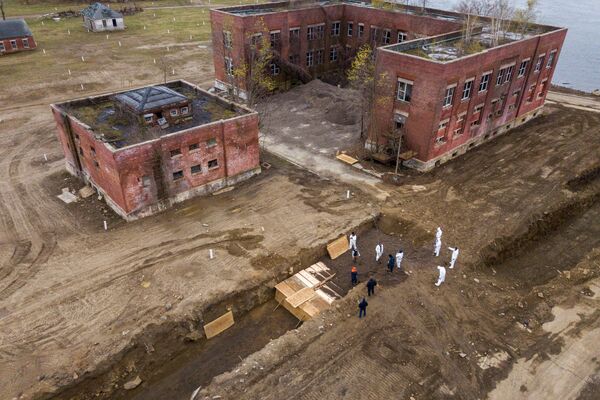 However, retired UN Independent Expert on the Promotion of a Democratic and Equitable International Order Alfred-Maurice de Zayas looks at the problem from a different angle: he stresses that the US is scapegoating the WHO, while "Trump himself bears a high level of responsibility for the inadequate US response" to the COVID-19 outbreak.

"UN Secretary-General Antonio Guterres has called for increased support of the WHO, which at this crucial juncture is indispensable to defeat the common enemy", the expert says, presuming that scapegoting the WHO amid the pandemic "is not only vicious, it is criminally reckless" given its life-saving and coordinating function.

According to de Zayas, there's no surprise that the White House was caught off guard: the US COVID-19 tragedy is "reminiscent of the US unpreparedness to deal with Hurricane Katrina that devastated New Orleans in 2005 or with the catastrophic floods in Houston following Hurricane Harvey in 2017", he notes.

As we plan to recover from this pandemic, we must build inclusive and sustainable economies and resilient societies.https://t.co/Xehcl68clI

​"All three disasters were predictable and the suffering could have been significantly reduced if preventive measures had been taken in a timely fashion", the former UN official argues, stressing that instead of funding research and development in the fields of both prevention and cure of diseases, Washington was pouring money into "the military-industrial-financial complex".

The expert cites his 2014 report to the UN Human Rights Council, where he condemned the squandering of 40% of the US budget on the Pentagon, military bases abroad, procurement, research and development into nuclear and biological weapons, lethal autonomous arms, as well as quasi-military expenditures such as espionage, the CIA, the NSA, etc. "I proposed converting part of the 'military establishment' into a peacetime industry", he recollects.

De Zayas highlights that at the same time, "the health care system in the US is a disgrace for a country that pretends to lead the world", with its hospitals and clinics being there "for the rich and super-rich".

The former UN official asserts that the WHO will survive, as UNESCO and UNRWA have survived despite the US unilateral withdrawal from the programmes. According to him, the problem is that most Americans think of the United Nations "as useless, unless it does what Washington wants it to do".

"The international community should learn to do without the United States and join forces in international solidarity", he stresses. "If we are going to survive on this common Planet Earth, we need a paradigm change – away from unilateralism".

Now that the US has suspended its funding to the WHO, "the European Union, China and many other countries can sustain the United Nations and its agencies through enhanced contributions", the former UN official notes, referring to German Foreign Minister Heiko Maas' decision to increase the country's support for the agency.

"Indeed, there is enough money around - but also a lot of wrong priorities", de Zayas remarks. "'People power' should ensure that in democratic countries, the will of the majority is respected and not only the caprices of the elites".