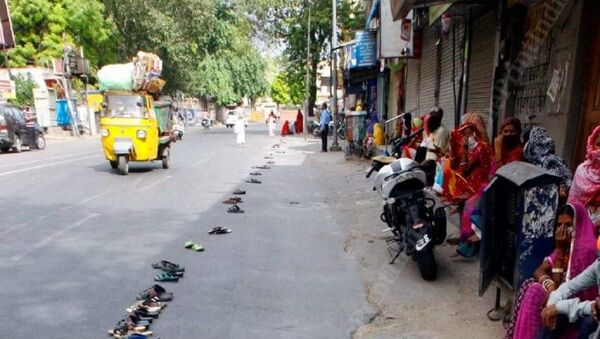 New Delhi (Sputnik): Under the Indian government’s $23 billion relief package for people affected by the lockdown, around $6 billion was for free rations and $5 billion for cash transfers for women and senior citizens. Daily wagers are the worst hit by the lockdown, as they have lost their source of livelihood.

A long line of slippers could be seen on a road outside the Bank of Baroda branch in Ajmer city of India's state of Rajasthan on Thursday. Some of the women have been waiting outside the bank for more than three hours and to protect themselves from the scorching heat, they have left their slippers on the road to mark their turn and in order to take shield under shade.

Slippers lined outside the Bank of Baroda branch in Ajmer while waiting to withdraw cash amid #COVID19 #lockdown in #India pic.twitter.com/9aghlMiQTy

​The surprise element is that these women are waiting under the summer sun to inquire about their relief money announced by the government and if it has been deposited, in which case also to withdraw the money.

Of the government’s $23 billion relief package for people affected by the lockdown, around $5 billion is for cash transfers for women and senior citizens. This cash transfer makes for $6.51 (INR 500) per account of women registered under the government scheme.

A woman outside the bank, who did not wish to be named, said: “"We are here to withdraw our INR 500 announced by the government from our Jan Dhan accounts. INR 500 are a lot these days”.

People from certain sections of the society have been hit severely by the lockdown, resulting in cash shortages and so the government’s $6.51 is also enough for them as a relief measure.

Meanwhile, in some states, there are reports that panic among people to withdraw the money is due to rumour-mongering by miscreants.

​Ravi Kumar, a resident from the Indian state of Bihar, told Sputnik that local political leaders and their followers have asked people to withdraw the relief money as soon as possible, otherwise the government will take it back from their accounts.

He said that these politicians want to take leverage of the relief money in the upcoming state assembly elections. “They are telling people to withdraw money, so they can use it in the elections to ask for votes”, he added.

India has extended the lockdown until 3 May, but economic activities will resume from 20 April to support daily wage workers.