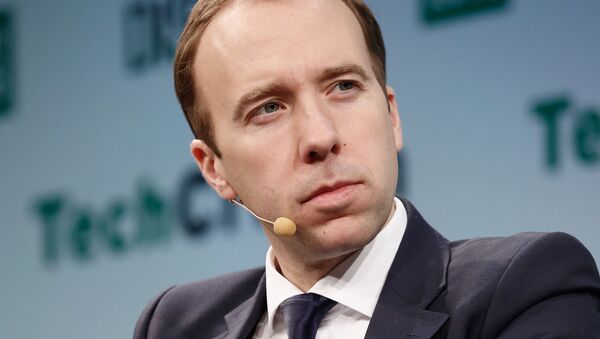 Lilia Dergacheva
All materialsWrite to the author
The pair traded blows as the discussion centred around coronavirus testing, which the health secretary had earlier vowed to introduce across-the-board.

Good Morning Britain host Piers Morgan has turned heads by verbally attacking Health Secretary Matt Hancock during an appearance by the latter on the programme via video connection to defend the government’s record in the coronavirus battle.

A normal exchange quickly escalated into a war of words as Hancock and Morgan both tried to talk over each other.

Morgan, who apparently couldn’t wait to hear the minister’s explanation of failing to hit a promised 25,000 COVID-19 tests per day target, started off:

"You were asked about it yesterday and you said that the question was wrong but it wasn’t".

"I'm giving you the change to correct what you said as that was absolutely what you said according to the press release in front of me from last month", Morgan zeroed in.

As Hancock attempted to get around the claim, Morgan gave him a push.

"I really think you are missing the pubic mood", Hancock retorted, unable to conceal his irritation, and prompting the GMB host to hit back:

"I don't give a damn about the public mood…”

“You are just buying yourself a bit of time", he went on without pausing, stating the “reality” in a matter-of-fact tone: “you were not prepared".

"I would admire you more if you did like Emmanuel Macron and say 'do you know what, we were not prepared'".

Trying to get a word in, Matt Hancock continued: "Let me speak".

“You don't run this show. You do your job and I do mine”, Morgan thundered, with Hancock continuing:

"I will answer these questions and if you interrupt me again I will just keep talking".

As the interview drew to a close, the health secretary leapt at a chance to land a jab:

"Thank you, and thank you for letting me answer the question".

Britain has been in total coronavirus lockdown since 23 March, having to date seen as many as roughly 93,900 confirmed cases, including about 12,100 related deaths, per fresh WHO estimates.