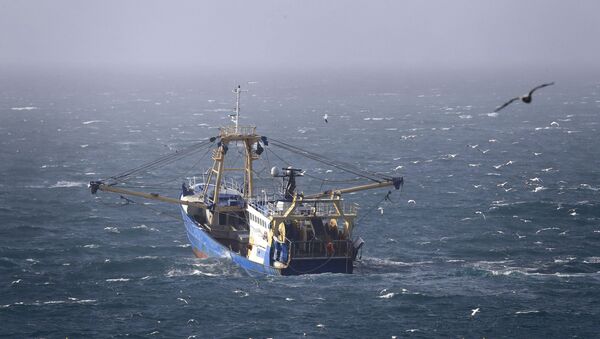 © AP Photo / Gareth Fuller
Subscribe
The Cod Wars were a series of diplomatic clashes between the UK and Iceland over fishing rights in the north Atlantic. Starting in 1958 and finishing in 1976, they resulted in the tiny island nation greatly expanding its fishing rights, becoming a key fishing country.

In the 1970s, Iceland claimed to have been suffering from “colonial exploitation” in a bid to win the support of African and Asian nations during their bitter fisheries feud with the UK known as Cod Wars, the Express reported, citing documents from the National Archives.

According to the unearthed documents, in 1972, an Icelandic observer attended a meeting of the Scientific Council of the Organisation for African Unity in Ibada, Nigeria in an attempt to win solidarity and support for their view of the decades-long fisheries dispute with the UK.

As one British official wrote, according to the Express: “They have been representing that they are now suffering from much the same type of ‘colonial exploitation’ which claims that the countries of Africa and Asia have suffered in the past”, adding that the Icelanders “seem to have a measure of success”.

To counter the Icelandic lobbying, the UK sent envoys of its own, but they encountered a steep uphill battle, as Iceland's “colonial” argument reportedly hit home with African and Asian countries.

One British official reportedly wrote: “We realise that, in general, African and Asian countries tend to be sympathetic toward the ideas that the Icelanders are advocating. <...> We therefore recognise that a statement of our side of the case may not be particularly well-received”, citing “the Ivory Coast, Ghana, and Zaire” as nations inclined to a more moderate point of view.

In conclusion, the diplomat reportedly wrote: “It has to be recognised that less-developed countries tend to maintain that, for historical reasons, the cards in the pack of international law have been stacked against them by the major maritime powers”.

The Cod Wars were a series of diplomatic run-ins between the UK and Iceland on fishing rights in the north Atlantic, starting in 1958 and finishing in 1976.

The First Cod War started when Iceland declared a four-mile zone around its shores, but the UK hit back with a ban on the import of Icelandic-caught fish. In return, Iceland expanded its zone to 12 miles and banned foreign fleets from fishing in these waters at all, to which the UK replied by sending Royal Navy frigates to accompany its vessels.

The Second Cod War was sparked by Iceland's plans to expand its zone once again, to 50 miles. A few years later, invigorated by its success, Iceland extended the limits further, this time to 200 miles, triggering the Third Cod war.

The Cod Wars ultimately came to an end when NATO stepped in to help resolve the issue. Some see the agreement as highly favourable to the tiny 330,000-strong nation, which was a key ally of NATO during the Cold War-era. Following the 2016 Brexit referendum, there have been fears that the UK wresting back control of its waters may trigger the fisheries feud anew.

According to the Fisheries Department of the Food and Agriculture Organisation (FAO), Icelandic marine fishery landings account for 1.7 percent of the world’s catches, making Iceland the 15th largest fishing nation in the world. The industry is key to the Icelandic economy, occupying 6.5 percent of the workforce.

000000
Popular comments
Hi, my name is Becca! Want to meet for sex? Follow the link - sexapp.me