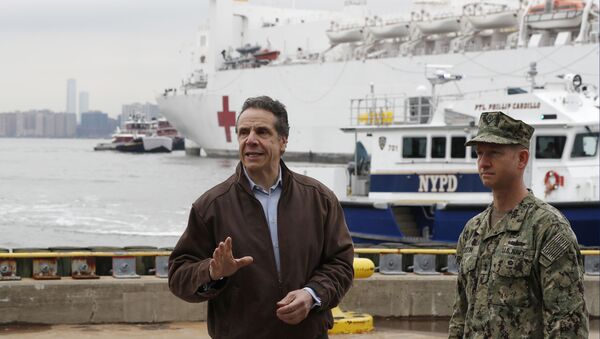 © AP Photo / Kathy Willens
Subscribe
New York state has been the epicentre of the coronavirus outbreak in the United States, with 10,834 deaths. The state’s Governor, Andrew Cuomo, has been getting a lot of attention on social media for the way he is handling the crisis, which is often in stark contrast with US President Donald Trump.

Andrew Cuomo, 62, has been lauded by many critics for his performance during press briefings since New York state declared its first case on 1 March.

Unlike President Trump - who has either played down the crisis, sought to shift the blame or bigged himself up - Cuomo has sounded sensitive, intelligent and on top of his brief.

Columbia University politics professor Robert Shapiro, told the AFP news agency: “He's really come across as someone of presidential stature. It's comparable in some ways to the 9/11 attacks when Rudolph Giuliani rose to the occasion and became the nation's mayor, so to speak."

​Cuomo's daily briefings, which have been carried on most US TV networks, have raised his profile and led some to call for him to replace Joe Biden as the Democratic candidate in November’s presidential election.

A poll commissioned by the conservative Club for Growth found 56 percent of Democrats wanted Cuomo to be the candidate, compared to 44 percent for Biden.

Cuomo, who has been Governor of New York since 2011, comes from an illustrious political dynasty in the Democratic Party and was also married to a Kennedy for 15 years.

Mario - whose father emigrated to New York from Italy in 1920s - was heavily tipped to run for president in 1988 and 1992 but cried off and two years later lost the Governor’s mansion to George Pataki in the so-called ‘Republican Revolution’.

​By then Andrew was working for the Clinton administration and in 1997 he was promoted to Secretary of Housing and Urban Development, a post he kept until the Democrats lost power in January 2001.

In 2005 he divorced Kerry Kennedy - daughter of the assassinated former presidential candidate Robert F. Kennedy - and later married TV chef Sandra Lee, although they too split up last year.

After running a campaign in which he targeted corruption Cuomo was elected as New York state’s Attorney General in 2007, a traditional stepping stone to the gubernatorial mansion in Albany.

​While in that job Cuomo brought a civil lawsuit against New York Senate Majority Leader Pedro Espada, a fellow Democrat, for stealing US$14 million from a health clinic.

Eliot Spitzer resigned as Governor in 2008 amid the Emperors Club prostitution scandal and his successor David Paterson was mired in a witness-tampering scandal so when Cuomo put his name forward he quickly won the Democratic nomination and trounced his Republican rival in 2010.

​He is a moderate who regularly clashes with the left wing of the Democratic Party, including the Mayor of New York city, Bill de Blasio, and Bernie Sanders.

Cuomo’s younger brother Chris, a journalist and anchor with CNN, contracted coronavirus at the end of last month but promised to keep broadcasting from self-isolation at home.

​Chris Cuomo hit the headlines in August 2019 when he lost his cool and was caught on camera raining expletives down on a man who had called him Fredo after a character in The Godfather movies.

Chris Cuomo was widely mocked after he claimed the use of the name Fredo was “like the N-word to us.”

Fredo was the hapless brother of Sonny and Michael Corleone and President Trump’s son, Donald junior, tweeted: “‘Take it from me Fredo isn’t the N-word for Italians, it just means you’re the dumb brother.”

Cuomo has been widely praised by New Yorkers for his reassured presence during daily briefings on the coronavirus crisis, which has claimed the lives of more than 11,000 people in the Empire State.

“You know, the president stood up and said, ‘Forget the Constitution of the United States, forget the concept of federalism,’” Cuomo said. #CuomoForPresident

​He was quick to invoke his executive powers to order people to stay indoors, increase the number of hospital beds and call up the National Guard and he also launched a non-profit hand sanitiser.

Cuomo has also butted heads with the President, who he dubs "King Trump".

Earlier this week when Trump said: “When somebody’s the president of the United States, the authority is total and that’s the way it’s gotta be. It’s total. And the governors know that.”

Referring to the US’s long history of federalism and state’s rights, Cuomo told a TV show host: “All that annoying federal-state back-and-forth that our Founding Fathers went through, he just disregarded that.” 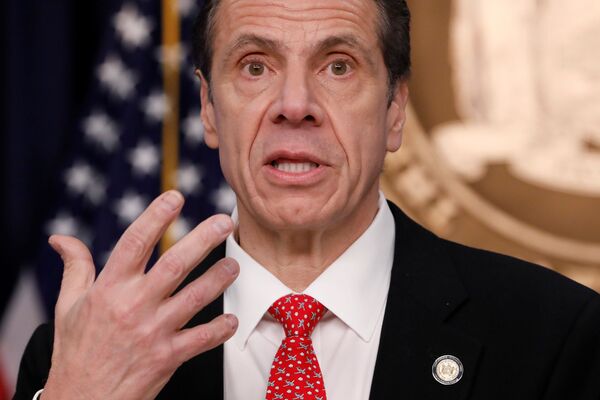 Cuomo has described those breaking New York’s lockdown as "self-destructive" and "insensitive" but his strict tone has been accompanied by calls for residents not to panic.

His occasional wisecracks have also lifted the tension.

"I live alone and I'm even getting annoyed with the dog being in one place," he said recently during one briefing.

Doug Muzzio, political science professor at Baruch College, told AFP the briefings were a “combination of press conference and therapy session and a little stand-up comedy."

This is ⁦the new @NYGovCuomo⁩ Executive Order requiring all New York State residents to wear a mask or cover their nose and mouth when in public. More limited in scope than previous EO’s, it:

-Takes effect Friday night at 8p
-Applies to everyone over the age of 2 years old pic.twitter.com/JNGwqxT03T

​Cuomo's humanity and self-deprecation come as a stark contrast to Trump, whose belligerent, arrogant and even delusional performances have left audiences shocked and even ardent Republicans embarrassed.

The hashtag #CuomoForPresident has even been trending on Twitter.

Biden is widely expected to choose a woman as his running mate this year, but Cuomo may be in a good position to run for the White House in 2024, if voters have not forgotten him by then.

But it is possible that, like his father before him, he has missed his opportunity.

000000
Popular comments
Gov. Cuomo for President, who will give Trump a swiping Defeat, and make “AMERICA” Safe again. Cuomo represents what America needs to reverse the Devastating Image this POTUS is leaving behind, with an Economy, before the COVID-19, in Shambles and International relations in Disgrace..
Normpich
16 April 2020, 19:16 GMT4
000000
He is refreshing to listen to, he's human, reads, studies, has true intelligence and compassion all qualities completely devoid in the Trump....he is simply everything Trump is Not starting with just being human, would vote for him for President with no second thoughts.