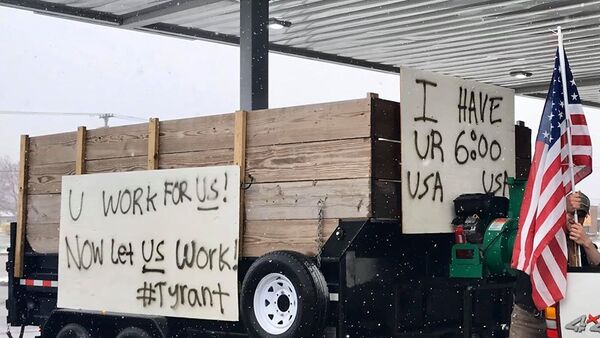 Michigan citizens took to the streets on Wednesday to protest Governor Gretchen Whitmer's stay-at-home order and other restrictions issued amid the coronavirus outbreak in the United States.

Protesters were seen waving American flags and signs in support of President Trump, urging the authorities to reopen the economy, as all non-essential businesses have been closed in Michigan due to the outbreak.

Katerina Brumm, a protest participant and Michigan resident, says that Whitmer has violated "our constitutional rights" and has gone "too far by restricting what we can or cannot buy".

"Now as far as our governor is Gretchen Whitmer, we are mad at her power grab not caring if it affects small business, farmers, everyone. We cannot go to friends or family for fear of being ticketed or worse jailed. If we do not stop this abuse of power now, it will only get worse", she explains.

Brumm adds: "I value my rights as an American and I will do anything within my power to keep those rights. If we sit by and let them take those rights I shudder to think what we would become. We want to stand together... not as Democrats or Republicans, or any party... our stance is "we the people", plain and simple. If our elected officials will not stand behind us and the Constitution, we will get them out and replace them with regular people who have no political agenda".

Another participant Robert Collins shares Brumm's views: according to him, the governor's current executive order is "over-bearing and over-reaching".

"We have the right to travel freely at any time and the right to conduct trade and commerce within the current regulations and laws governing such trade. She has stopped all activity in regards to those freedoms. We understand that the COVID-19 virus is very contagious and dangerous and that SOME restrictions are necessary for the health of all. But some of the restrictions are nothing but stupid", Collins laments.

He, however, points out that he's been fortunate enough to collect State unemployment benefits as he's been laid off from his job since 20 March.

While the protest may not change much in Whitmer's executive order, it will certainly bring national attention to her actions, and "perhaps keep her from becoming Joe Biden's choice as the Vice-Presidential candidate", Collins says.

Even though demonstrators were asked to remain in their vehicles, some of them were spotted on the steps of the Michigan Capitol with signs calling for Whitmer's resignation. Those who stayed in their cars created a massive traffic jam.

The protest was organised by the Michigan Conservative Coalition and the Michigan Freedom Fund, who asked protesters to comply with social distancing rules and stay in their vehicles.