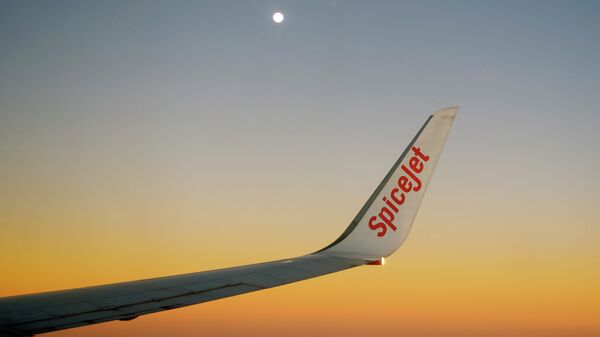 New Delhi (Sputnik): As the flight operations in India remain temporarily suspended as per the lockdown provisions, which has been extended to 3 May, private Indian airlines have offered their aircraft and resources in the service of the nation for ferrying COVID-19 relief material during the ongoing coronavirus crisis in the country.

In order to mitigate the shortage and supply disruption of essential items and medical equipment during the coronavirus pandemic in the country, Indian budget carrier SpiceJet carried out its first freighter flight to China to bring back medical supplies from Shanghai to Hyderabad.

Ajay Singh, Chairman and Managing Director of SpiceJet, said, “From today, SpiceJet freighters have begun ferrying crucial medical supplies from China. In addition to Shanghai, we are also operating freighters to Singapore and Sri Lanka today".

The low cost carrier has so far transported over 2,700 tonnes of cargo on more than 300 flights since the nationwide lockdown began on 25 March. Recently, the airline also undertook its first-ever cargo flight to Ho Chi Minh City in Vietnam from India's Hyderabad.

While its regular cargo flights are being operated, the airline has also deployed its passenger aircraft fleet of B737 and Q400 to operate cargo-on-seat flights.

As national and international flight operations remain suspended in the country in view of the national lockdown that took effect on 25 March and has now been extended to 3 May, private airlines are extending a helping hand to ferry medical supplies and stranded passengers - a special flight between the national capital Delhi and Jodhpur (in the state of Rajashtan) was operated by SpiceJet to transport 136 Indians evacuated from COVID-19-hit Iran, to a government quarantine facility.

This comes when airlines have been incurring significant losses due halted operations. A majority of Indian airlines, including national carrier Air India, have announced salary cuts for staff and withdrawn perks.

According to an aviation consultancy, the Indian aviation industry is expected to post losses of up to $3.6 billion this year.

India has 11,439 active coronavirus cases and has witnessed 377 deaths. According to federal Health Ministry, 1,305 patients have been cured and discharged so far.