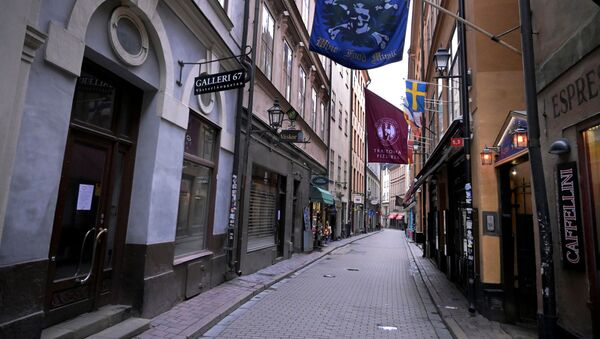 Sweden's aberrant approach to handling the coronavirus epidemic, with minimal restrictions in place and public life running almost in a businesses-as-usual mode, has been an increasing cause of concern, as the infection curve becomes steeper.

Twenty-two Swedish researchers have penned an open letter slamming Sweden's strategy to curb the coronavirus epidemic. Among other things, they claim that the death toll in Sweden is now rising “to the heights of Italy”.

In their appeal published in the daily Dagens Nyheter, 22 Swedish researchers claim that the Swedish health authorities have failed, and suggest that elected officials must now intervene “with swift and radical action”.

According to the researchers, Sweden's Public Health Agency has on at least four occasions claimed that the spread of infection has levelled out and plateaued, even though this has not been the case.

“They are not inclined to change their recommendations even when Sweden's curves start to differ radically from those of neighbouring countries”, the researchers stressed.

Statistics indicate that the number of COVID-19 deaths in Sweden exceeds that of its Nordic peers combined (1,033 in Sweden vs. 59 in Finland, 299 in Denmark, and 139 in Norway). All of Sweden's neighbours have implemented severe restrictions, such as closing schools, cafes, and restaurants and in effect completely cutting off public life. Sweden, by contrast, avoided mandated lockdowns, instead placing faith in citizens' conscienctiously practicing social distancing and, if necessary, self-isolation.

​Tweet: Number of corona deaths in Sweden and Finland. But remember that it is Sweden that is doing right and all other countries are doing it all wrong, according to the Public Health Authority (Gustav Kasselstrand, Alternative for Sweden party)

Jan Lötvall, a professor of clinical allergies at the University of Gothenburg and one of the signatories, stressed that the public has not really taken the coronavirus seriously.

“This is because they have received questionable messages from the Public Health Authority and our elected officials”, Lötvall explained to the Aftonbladet.

Another problem, according to Lötvall, is that the Public Health Authority hasn't been open about what has and is being done in other countries.

“Countries in Asia have managed to reduce the spread, very effectively. If we do not take powerful action now, we will have to do it later”, Lötvall said.

According to the researchers, a quick change is needed immediately or Sweden will suffer even more drastic consequences. Among other things, they suggest closing schools and restaurants, providing all healthcare professionals working with the elderly with proper protective equipment, conductig mass testing on all healthcare personnel, and enforcing quarantines on entire families if a single member is ill or has tested positive.

“With officials lacking the talent to predict or contain the epidemic, officials must intervene with swift and radical measures”, they concluded.

“I don't understand what they mean. The healthcare system has always been in control”, Tegnell said. “If you look at the curve, we have consistently had around 60 dead per day. We have had an unfortunate development in elderly care, and we have started to work hard on that”.

Tegnell stressed that statistics can sometimes paint an incorrect picture. He also emphasised that it is far too early to conclude which strategy has worked best, partly because different countries are in different stages of the epidemic.

“The death tolls are not correct. For example, in Italy, only deaths in hospitals are recorded. There are some basic flaws in the criticism. If you compare New York, which has about as many inhabitants as Sweden, they have ten times as many dead. Belgium also has significantly more deaths than us, so many countries have also gone the other way”.

Sweden has seen a total of 11,445 confirmed COVID-19 cases and 1,033 fatalities. Its laissez-faire approach has been criticised by medical professionals before.