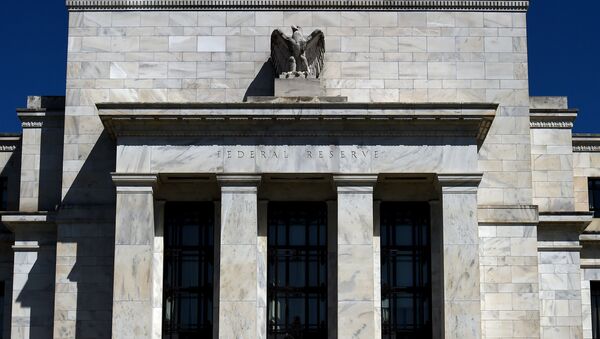 WASHINGTON (Sputnik) - More American businesses are expected to lay off workers due to the coronavirus pandemic, the Federal Reserve said in a report on US economic conditions on Wednesday that indicated higher unemployment above the near 17 million job losses reported over the past three weeks.

"Economic activity contracted sharply and abruptly across all regions in the United States as a result of the COVID-19 pandemic", the Federal Reserve said in its "Beige Book" report for April. "Looking ahead, contacts in manufacturing, finance, and professional & business services said they expect staffing levels to hold steady from current levels, but businesses across all other sectors expected further staff cuts, on net".

The Beige Book report comes ahead of Thursday’s weekly jobless claims due from the Department of Labor. A total of 16.8 million Americans filed for unemployment in three past weeks, tallied claims from the department showed.

The Fed’s economic conditions report, based on anecdotal information collected by its 12 district central banks through 6 April, said employment declined in all districts, some a lot more than others.

"Employment cuts were most severe in the retail and leisure and hospitality sectors, where most districts reported widespread mandatory closures and steep fall offs in demand", the Beige Book report said.

As for wages, the report said there were fairly widespread reductions in earnings in the hard-hit leisure & hospitality and retail trade sectors, while wages in other industries were generally flat to down slightly.

As of 15 April, over 605,000 coronavirus cases have been registered in the country, with almost 24,600 fatalities reported,  the US Centres for Disease Control and Prevention data shows.