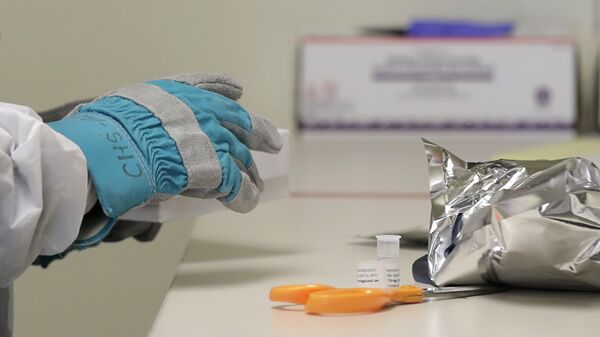 Pratibha Sharma
Sputnik correspondent
All materialsWrite to the author
New Delhi (Sputnik): The moment China identified SARS-CoV-2 as the virus that caused the infection, WHO named it COVID-19 and efforts kicked off worldwide to develop a vaccine to fight it. Indian Prime Minister Narendra Modi has also asked young Indians to take the lead in developing a vaccine.

One of India's major pharmaceutical firm, Zydus Cadila, has told Sputnik that a vaccine for COVID-19 is currently in the animal testing stage and if the results are successful it should enter clinical studies in the 2nd quarter of this year.

Zydus's spokesperson told Sputnik that “with regards to a vaccine for COVID-19, we have already initiated an accelerated research programme with multiple teams in India and Europe for developing a vaccine for the novel coronavirus (COVID-19)".

To support the fight against the coronavirus, the Indian government has announced investments worth $2 billion (INR 15,000 crore) for the so-called "India COVID-19 Emergency Response and Health System Preparedness Package".

Talking about the vaccine, the spokesperson stated that its development is based on two approaches - first is the development of a DNA vaccine and second is a live attenuated recombinant of the measles virus vectored vaccine against COVID-19.

"The first approach deals with the development of a DNA vaccine against the major viral membrane protein responsible for the cell entry of the novel coronavirus. The plasmid DNA would be introduced into the host cells, where it would be translated into the viral protein and elicit a strong immune response mediated by the cellular and humoral arms of the human immune system, which play a vital role in protection from the disease as well as viral clearance".

Zydus Cadila kicked off a fast-tracked programme to develop a vaccine on 15 February. During the Swine Flu outbreak in 2010, Zydus Cadila was the first to develop and domestically-manufacture the vaccine to combat the menace.

Talking about the second approach, the spokesperson said "we are also working on a live attenuated recombinant measles virus vectored vaccine against COVID-19. The recombinant measles virus (rMV) produced by reverse genetics would express codon-optimised proteins of the novel coronavirus and will induce long-term speciﬁc neutralizing antibodies, which will provide protection from the infection".

Meanwhile, the World Health Organisation has also activated a research and development (R&D) blueprint to accelerate vaccine development. The watchdog said in a statement on 13 April that a group of experts with diverse backgrounds is working on the same under its coordination.

According to India's Ministry of Health, the country has 11,439 COVID-19 positive cases so far, 1,076 of which were reported over the last 24 hours. Some 377 people in the country have lost their lives due to the COVID-19 pandemic.