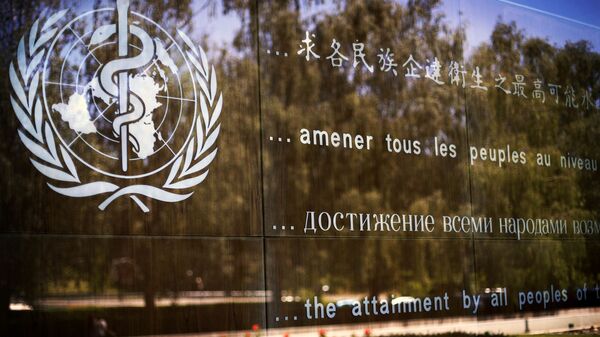 © AP Photo / Anja Niedringhaus
Subscribe
International
India
Africa
US President Donald Trump has said he is to pull the US$400 million annual funding which the United States gives the World Health Organization. He claimed the WHO had made mistakes and impeded the US’s response to the COVID-19 pandemic.

Germany’s Foreign Minister Heiko Maas has criticised President Trump for "blaming others" over the coronavirus crisis.

On Tuesday, 14 April, Trump accused the WHO of "severely mismanaging" the crisis and failing to stop the virus spreading from China.

​Although Maas did not specifically mention the White House, he tweeted in response to a news story about Trump’s announcement: "Blaming others won't help. The virus knows no borders. One of the best investments is to strengthen the UN, above all the under-financed WHO... in the development and distribution of tests and vaccines."

Russia's deputy foreign minister Sergei Ryabkov said on Wednesday: "We see yesterday's announcement by Washington on freezing funding of the WHO as most concerning. It is a sign of the very selfish approach of the US authorities to what is happening in the world due to the pandemic."

Belgian MEP Guy Verhofstadt also tweeted: "Trump is repeating the same tricks over and over again. Blaming international organisations for his own failures. The exact opposite should happen. We have to strengthen international cooperation to be better prepared for the next pandemic."

In an article in The Atlantic in 2018, journalist Ed Yong found the US was “disturbingly vulnerable” to a pandemic and warned: “The White House is now home to a president who is neither calm nor science-minded.”

“It depends on a just-in-time medical economy, in which stockpiles are limited and even key items are made to order,” he said.

Michael Osterholm, the director of the Center for Infectious Disease Research and Policy at the University of Minnesota, told The Atlantic: “Each year, the system gets leaner and leaner. It doesn’t take much of a hiccup anymore to challenge it.”

In September 2019 a report by the Global Preparedness Monitoring Board, commissioned by the United Nations Secretary-General Antonio Guterres warned of a “very real threat” of an airborne pandemic which could wipe out almost five  percent of the global economy.

​In the same month that report came out the Trump administration pulled out of the $200m Predict programme, which was designed to alert the White House to potential pandemics.

The project - which had identified more than 160 different coronaviruses since 2009 - was granted an emergency funding extension by USAid earlier this month.

​Peter Daszak, president of EcoHealth Alliance, told the Los Angeles Times: “It’s absolutely critical that we don’t drop the idea of a large-scale, proactive, predictive program that tries to catch pandemics before they happen. Cutting a program that could in any way reduce the risk of things like COVID-19 happening again is, by any measure, shortsighted.”

Trump's attack on the WHO came as Johns Hopkins University counted a record 2,228 deaths from coronavirus in the US over the past 24 hours, bringing the total to 25,700.

China said it was "seriously concerned" about the US decision to suspend funding for the WHO, which is based in Geneva, Switzerland.

"The current global epidemic situation is grim. It is at a critical moment. This US decision will weaken WHO's capacities and undermine the international cooperation against the epidemic," Chinese foreign ministry spokesman Zhao Lijian said.

​Trump has accused the WHO of being biased towards China and he has also claimed the Chinese deliberately under-reported their coronavirus figures - currently running at 82,000 cases and 3,342 deaths, a lower death toll than Germany and Belgium.

Last month, amid reports 40,000 people might have died in Wuhan alone, Trump said: “Their numbers seem to be a little bit on the light side, and I’m being nice when I say that.”

According to a WHO statement released on Tuesday 14 April, "The WHO expects all its member states to report data in a timely and accurate manner under the international protocols that have been agreed by the member states of WHO.”

​Critics of Trump say he is using a tried and tested strategy from his playbook - to shift the blame from his own administration onto a plausible scapegoat, in this case China and the WHO.

It is a strategy which is likely to go down well with Trump supporters in traditional Republican states who have a low opinion of China and of international organisations like the WHO, the United Nations and even NATO.

Last month Trump said if his administration managed to keep the coronavirus death toll to 100,000 it would have done “a very good job” and it could be that when the election comes round in November he is able to persuade those who voted for him in 2016 that he deserves another four years in the White House.

Whether Trump, in his second term, would increase US funding on pandemic preparedness is open to debate.