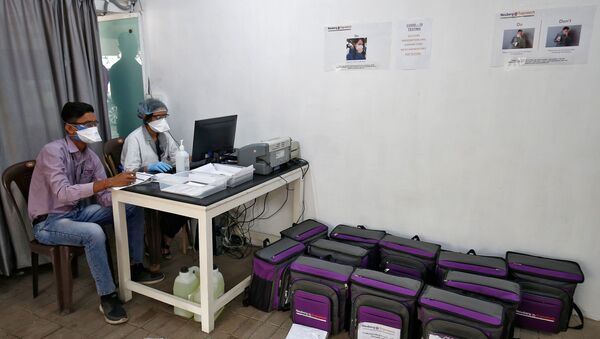 New Delhi (Sputnik): Following increased demand for hydroxychloroquine from 30 countries, India cleared the supply of the drug to 13 countries, including the US, last week. India had earlier banned the export of the drug, but this was lifted following a retaliation threat from the US.

Malaysia and Turkey have joined the list of countries seeking a supply of hydroxychloroquine from India, sources in the Indian Ministry of External Affairs have revealed.

“India is considering the supply request. However, decision is yet to be made in this regard”, the ministry sources said.

On the other hand, Malaysia's government has confirmed the supply of the drug and requested another batch from India.

"On 14 April, India has given permission for Malaysia to import 89,100 tablets", Malaysia's Deputy Foreign Minister Kamarudin Jaffar told Reuters on Wednesday. "We will try to get more hydroxychloroquine tablets from India, which is also subject to stock availability".

The request from Malaysia and Turkey to India has come as a surprise as the two countries have a strong anti-India stance with regard to the Kashmir issue, which has also impacted New Delhi’s trade ties with these countries.

In February, Turkey condemned the deaths of Muslims in the suburbs of the national capital Delhi following communal clashes. India lodged a strong protest against the “unwarranted remarks”.

On the other hand, Malaysia, which shares close ties with Pakistan, sparked tensions between itself and India on 30 September at the UN. Then Malaysian Prime Minister Mahathir Mohammad accused India of “occupying Kashmir” with regard to the abrogation of Article 370.

Without mentioning the conflict, India has cut its palm oil imports from the country, which used to be more than nine million tons annually.