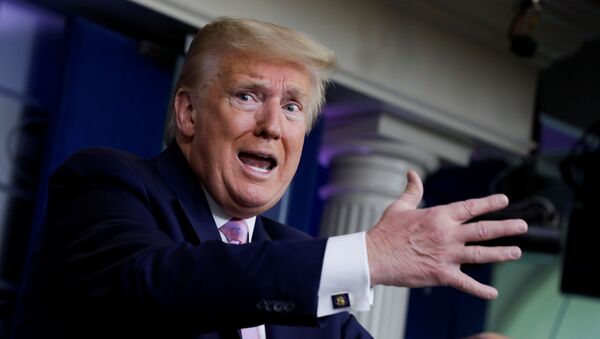 While US politicians on both sides of the aisle attempt to blame China for the more than 547,000 confirmed cases of the COVID-19 novel coronavirus and nearly 22,000 related deaths in the US, one geopolitics expert tells Sputnik that their rhetoric has no ground due to the fact that there was clear timeline of events regarding the virus’ spread.

KJ Noh, a peace activist, scholar on the geopolitics of Asia and frequent contributor to CounterPunch and Dissident Voice, joined Radio Sputnik’s Loud and Clear on Monday to discuss how China has become a scapegoat for Democrats and Republicans discussing the novel coronavirus, such as Former Commissioner of Food and Drugs and American Enterprise Institute fellow Scott Gottlieb.

Gottlieb appeared on CBS News’ “Face the Nation” on Sunday to assert that the World Health Organization (WHO) needs to investigate China for suppressing information on the novel coronavirus.

"Had they been more truthful...they might have actually been able to contain this entirely."

Noh stressed to hosts Brian Becker and John Kiriakou that the key thing to look at when unpacking this narrative about the novel coronavirus is the timeline of events.

“We know that the ... first suspected cases were in early December and probably not until December 7. The allegations that were cases before then, in November, are completely without foundation,” he asserted.

The scholar went on to explain that Hubei Provincial Center for Disease Control and Prevention convened an expert panel to assess reports of an unusual cluster of viral pneumonia cases on December 27, and then China notified the WHO of their findings by December 31.

“On January 1 they notified the US [Centers for Disease Control and Prevention (CDC)]. By January 3, US Homeland Security is notified, and then from then on there’s a huge packet of what are called the ‘Red Dawn emails’ - these are emails circulated among top American experts and the US top security brass where they explicitly discuss the dangers and the risks of this evolving pandemic,” he noted.

The so-called “Red Dawn emails” or “Red Dawn String,” as creator and Department of Homeland Security Chief Medical Officer Dr. Duane C. Caneva dubbed them, were created “to provide thoughts, concerns, raise issues, share information across various colleagues responding to Covid-19,” according to his interview with the New York Times earlier this month.

The email chain, which began in January during a period in which US President Donald Trump did not acknowledge the threat of the virus in the country, included a number of top medical professionals and their friends. A total of 80 pages from the email exchange were obtained by the NYT and released to the public, detailing the months-long struggle and frustration with 45, and organizations such as the CDC, over COVID-19.

Noh also highlighted the fact that near the end of January, Hubei Province, which contains Wuhan, the virus’s city of origin, was placed on lockdown. On January 27, the CDC also advised travelers to “avoid nonessential travel” to China, shortly after the US Department of State issued a “Level 4: Do not travel” warning for Hubei particularly and a “Level 3: Reconsider travel” advisory for the entire country.

“If that doesn’t send you the message, I don’t know what should, but at that point the senators start to sell off their stocks, so clearly they’re in the know, and what we’re seeing right now is this attempt to shift the blame … onto the Chinese for political ends,” he asserted, speaking of US Senators Richard Burr (R-NC), Kelly Loeffler (R-GA), Diane Feinstein (D-CA) and Jim Inhofe (R-OK), who have all been accused of insider trading following their classified January briefings on COVID-19.