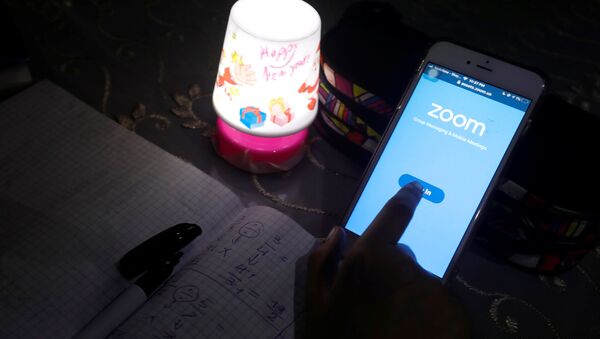 Despite a growing number of US military officials teleworking amid the COVID-19 pandemic, some options offered by popular video-conferencing software Zoom will no longer be allowed for official use by Pentagon-affiliated personnel due to increased cybersecurity concerns.

US Air Force Lt. Col. Robert Carver, a spokesperson for the US Department of Defense (DoD), spoke to initial reports of the ban with Military.com on Monday, confirming that US service members, contractors and civilians could no longer use the program for official DoD business.

"The department requires our workforce only use DoD-approved platforms when conducting official business," Carver said in a statement to the outlet, before noting that individuals would be allowed to use the software company’s “Zoom for Government” program, which has been given provisional authorization under the Federal Risk and Authorization Management Program (FedRAMP).

However, Carver later explained that US officials looking to use the program were only clear to either share or discuss “publicly-releasable DoD information not categorized as ‘For Official Use Only.’”

At present, dozens of companies and institutions, including the US Centers for Disease Control and Prevention and the US Department of Homeland Security, are listed as “Zoom for Government” customers.

Aside from the Zoom product highlighted by Carver, DoD guidelines specify that personnel have an array of remote work software to use for official business. A detailed list provided by the Pentagon includes programs such as Global Video Services Unclassified, Milsuite.mil, Defense Collaboration Services Unclassified and Boot Me, among other platforms.

The call by Carver comes as several organizations have urged employees and officials to be cautious of Zoom meetings over spikes in reports of interrupted teleconferences. Most recently, the Department of the Navy Chief Information Officer issued a memo informing service members of acceptable remote collaboration tools available for use amid the pandemic.

Since the issuing of multiple stay-at-home orders across the US, the practice of “Zoombombing,” in which a hacker interrupts a livestream, has spiked significantly. The nefarious behavior has disrupted Alcoholics Anonymous meetings, online classes and Sunday church meetings and even cut short a city council meeting in Maine after pornographic images were shared on the stream.

Last week, a teenager in Connecticut was arrested and charged with computer crimes for allegedly joining several Zoom streams hosted by a high school teacher and interrupting them with “obscene language and gestures,” the Hartford Courant reported, citing law enforcement officials.

The matter has gotten so severe that even the FBI has issued notices warning individuals of hijacked Zoom conferences. The bureau’s Boston office went as far as publishing a guide on how users can better protect their meetings. In a bid to keep users at ease, Zoom has also released recommendations on the best measures for keeping uninvited guests out of sessions.