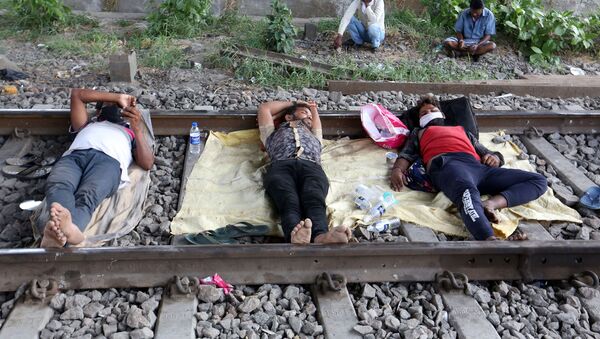 © REUTERS / PRASHANT WAYDANDE
Subscribe
New Delhi (Sputnik): The Indian government has extended a 21-day lockdown to 40 days until 3 May in order to contain the spread of COVID-19 in the country. When Prime Minister Narendra Modi announced the national lockdown, migrant workers began heading home due to the uncertainty over their livelihoods.

A migrant workers’ crisis has hit India once again as thousands of daily wagers reached Bandra Railway Station in Mumbai city in Mharashtra state to head for their homes on Tuesday after the government extended the lockdown.

The workers, mostly from Bihar and Bengal states, had hoped that train services would resume on Tuesday with the end of the 21-day lockdown, which was eventually prolonged. They ended up protesting at the railway station demanding that they be allowed to go home. Police had to use force to disperse the crowd of thousands of workers amid the lockdown.

Thousands of migrants gather at Mumbai's #Bandra railway station and protested. All are migrant workers, specially from Bihar-Bangal and they wanted to go home. They had hoped trains will start today. The police is investigating the matter and says crowd has been dispersed now. pic.twitter.com/NMHfv0CEpj

Daily wage workers protest in Mumbai during #lockdown. Community leader requesting workers not to congregate like this. Workers wants to go back to there homes pic.twitter.com/v8a9Wwca4L

Bandra in Mumbai right now. Police probing what caused such a large crowd to gather. pic.twitter.com/04H1Mnggd2

Those who tweeted in favour of World's Best CM - tag those Bollywood B graders and ask them what the hell is this !! pic.twitter.com/WOoTk60dvv

​The workers in Modi’s home state of Gujarat and Maharashtra have been protesting for the past two days and demanding that they be allowed to go home in the absence of work due to the lockdown. The crisis had earlier hit the country when PM Modi announced a 21-day lockdown, which forced the migrant workers, who were left with no daily earnings, to start a journey on foot to their home towns, but those in Gujarat and Maharashtra were stopped by the government.

The leader of the incumbent Maharashtra government, Aaditya Thackery, has accused the central authorities of the crisis:

The current situation at Bandra Station, now dispersed or even the rioting in Surat is a result of the Union Govt not being able to take a call on arranging a way back home for migrant labour. They don’t want food or shelter, they want to go back home

​The government’s promises for the poor seem to have fallen flat as unrest among the daily wagers continues. The authorities previously announced a relief package of around $23 billion for people affected by the lockdown, and out of this package there were around $6 billion for free rations and $5 billion for cash transfers for women and senior citizens.

Maharashtra remains the worst-affected state in the country, with 1,985 positive cases. India has recorded more than 10,000 cases so far, of which 9,272 are active; 1,189 patients have been discharged, while 353 have died.

000000
Popular comments
The Zionist globalists are using martial law, brought about by their weaponization of their COVID-19, in India to enforce their lockdown.