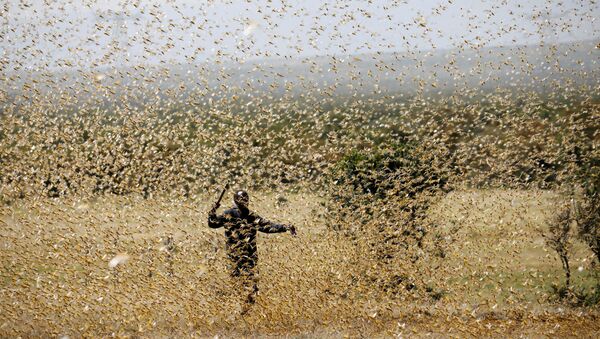 The development comes as Ethiopia and other African countries brace for a second wave of locusts. The first infestation was described by officials as the worst in 70 years, with swarms reaching the size of a megalopolis. UN experts say the upcoming wave could be 20 times larger than the first one.

Locusts also devastated other countries in Africa, including Somalia, Kenya, Djibouti, Eritrea, Tanzania, Sudan, South Sudan, and Uganda. The United Nations has called for $75 million to tackle the insect crisis in the region.

In Ethiopia, the pests caused widespread losses of corn, wheat, and sorghum as well as devastated land for cattle grazing. Fatouma Seid, an FAO Ethiopia representative, said that the infestation poses an “unprecedented threat to food security and livelihoods” in the country as it has not only caused a shortage of food, but hampered the planting season.

The situation in the nation has been exacerbated by the coronavirus outbreak. Ethiopia is Africa’s second-most populous country. Although there are only 74 confirmed cases and three deaths, testing is limited and health experts say the country could be soon inundated with new cases. Another issue caused by the outbreak is the delay in the supply of pesticides, which are used to battle the pests. Deliveries of chemicals have been disrupted since the start of the pandemic.

"Our absolute priority is to prevent a breakdown in pesticide stocks in each country. That would be dramatic for rural populations, whose livelihoods and food security depend on the success of our control campaign", said Cyril Ferrand, the FAO's Resilience Team Leader for East Africa.