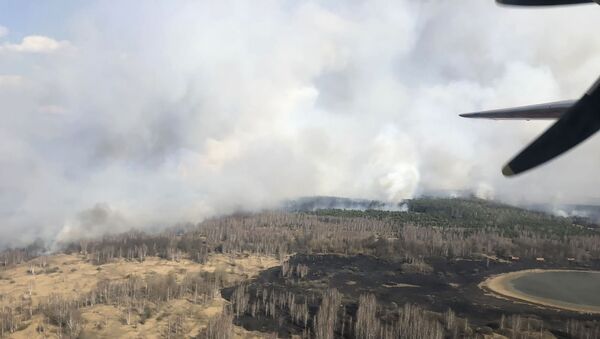 © AP Photo
Subscribe
International
India
Africa
Once severely traumatised Chernobyl in Ukraine’s Kiev Region is now struggling to battle another disaster - forest fires that have been devouring vast parts of its Exclusion Zone for the past week.

Due to strong winds in the area, the tempestuous Chernobyl wildfires are inching ever closer to the nuclear plant and the reactor that exploded in 1986, spawning concerns that there could be new severe radiation contamination, Ukrainian media holding "1+1" reported.

Radiation that has been there since the tragic fourth reactor blaze, has settled into the soil, with the roots of moss, trees, and other vegetation absorbing some of it. The latter is feared will ascend to the surface and spread in smoke when woods burn, with radiation levels estimated to have already spiked 16-fold.

The Exclusion Zone Management Agency is trying to protect critical infrastructure in the Chernobyl zone, such as the plant itself and the so-called “graves", or parking lots of abandoned, highly contaminated trucks that were left behind after the disaster.

“We have been working all night digging firebreaks around the plant to protect it from fire", Kateryna Pavlova, the acting head of the agency that oversees the area, told The News York Times.

While wildfires around the Chernobyl region are common, the current blaze was reported as arson by the Ukrainian police, who have since detained the man who reportedly started it, per local media.

The fires have already engulfed 8,600 acres of 12 abandoned villages, fields, and cemeteries since the wildfires started on 4 April, with over 360 firefighters, 100 fire engines, and several helicopters having been deployed to the scene.

After the 1986 Chernobyl disaster, authorities set up an area around the ill-fated plant known as the Zone of Alienation, or the Exclusion Zone - a rough circle with a nearly 18-mile radius. Access to the zone is typically granted to workers who manage the site and tourists who take guided excursions to the plant and the neighbouring area on the banks of the Pripyat River.