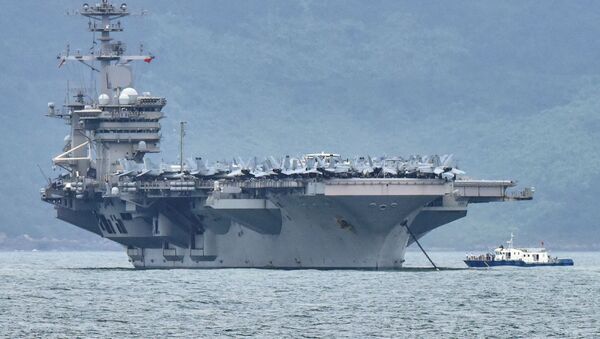 Oleg Burunov
All materialsWrite to the author
The number of confirmed coronavirus cases on board the USS Theodore Roosevelt has soared to almost 600 since the first three such infections were reported there on 24 March.

The New York Times (NYT) on Sunday reported that sailors running the nuclear reactors aboard the US Nimitz-class aircraft carrier Theodore Roosevelt were the first crew members to catch COVID-19 on the vessel last month.

“Three sailors had tested positive for the virus [at the time]. The outbreak started in the reactor department, with its crew members responsible for running the very heart of the ship: the nuclear reactors”, according to the newspaper.

The NYT's report comes a week after US President Donald Trump told reporters he supports a decision to remove USS Theodore Roosevelt Captain Brett Crozier over his “inappropriate” email regarding the COVID-19 outbreak on board the aircraft carrier.

“I didn’t make the decision, the Secretary of Defence was involved and a lot of people were involved. I thought it was terrible what he did, to write a letter? This isn’t a class of literature”, Trump said on 5 April.

The statement was preceded by US Navy Acting Secretary Thomas Modly announcing that he had decided to remove Crozier because he improperly sent an email about his concerns regarding the coronavirus outbreak on the ship using channels that were not secure to convey confidential information.

In the letter, Crozier wrote, in particular, that “sailors do not need to die", warning that "there will be losses” if no measures are taken. At the moment, the USS Theodore Roosevelt captain is reportedly fighting COVID-19 in the "distinguished visitors quarters" on a naval base in Guam.

On 24 March, Modly announced that at least three sailors on board the Theodore Roosevelt had tested positive for COVID-19 about two weeks after visiting Vietnam, in what became the first coronavirus cases registered on US Navy ships at sea.

As of Sunday, about 92 percent of the USS Theodore Roosevelt's crew members have been tested for COVID-19, with 585 positive results. The US Navy said that more than 3,900 sailors from an approximately 4,800-strong crew had been moved ashore to the Guam base.