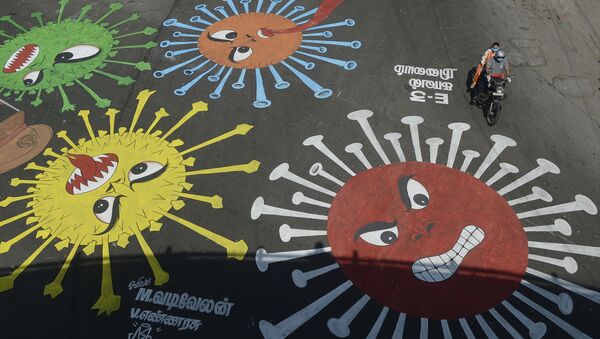 New Delhi (Sputnik): Marooned by the impact of the COVID-19 pandemic, Indian industries are awaiting a stimulus package from the government, which had already announced $22 billion in relief for marginalised sections of society on 26 March.

Addressing a press conference in New Delhi, Congress lawmaker Anand Sharma said, “Prime Minister Narendra Modi should be bold in declaring an economic package of at least 5 to 6 percent of gross domestic product".

Five to six percent of GDP translates to between $98 and $117 billion. Indian industries are eagerly awaiting help from a further package by the government to rescue the economy from the impact of COVID-19.

The Indian economy had been slowing down even before the pandemic hit. From a high of 8.2 percent GDP growth seen in 2018, growth fell to 4.7 percent in 2019.

Congress also said the government should not “discriminate and be unfair to states” by denying them the benefit of corporate contributions in the fight against COVID-19.

Indian Finance Minister Nirmala Sitharaman on 26 March announced a $22.36 billion relief package for the poor and daily wagers who have lost their jobs during the COVID-19 lockdown that began on 25 March.

“We have responded and reached out to the poorest of the poor. The package will ensure food and money for poor people affected by the lockdown", Indian Finance Minister Nirmala Sitharaman said while announcing the relief package.

In the relief package, the government announced the intention to provide five kilograms of either rice or wheat per person for three months. The federal minister also announced a $66,000 insurance policy to cover "frontline warriors" in the COVID-19 battle like nurses, paramedics, and sanitation workers.