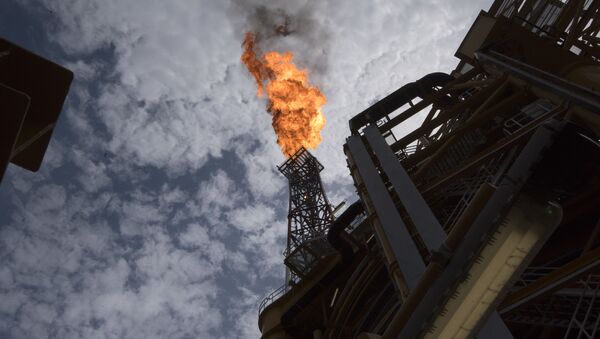 © AFP 2021 / RODGER BOSCH
Subscribe
Major oil producers around the world (excepting the USA) agreed in principle to cut oil output by 23 percent each on Thursday following a videoconference meeting of OPEC+ and partners. The fate of the deal remained uncertain, however, owing to Mexico's resistance to making cuts.

OPEC+ has reached an agreement to cut oil output by 9.7 million barrels per day (bpd) in the months of May and June after reaching a compromise with Mexico, Kuwait's oil minister has announced.

"By the grace of God, and through wise leadership, and continuous efforts and continuous talks since Friday, today we announce reaching a historic agreement to reduce production by approximately 10 million barrels of oil per day among members of OPEC+ starting May 1, 2020," Minister Khaled Ali Al-Fadhel wrote.

A source in one of the OPEC+ delegations confirmed to Sputnik that the deal envisions a 9.7 million bpd cut over the next two months. "We now have the deal. [Production will be cut by] 9.7 million barrels per day," the source said.

Mexico's minister of energy Rocio Nahle thanked other members for their support on Twitter, with Iran's oil ministry confirming that the deal included Mexico. Earlier, the Latin American country held out against making the necessary 400,000 bpd in cuts, saying its limit was 100,000 bpd. Azerbaijan's delegation revealed that the compromise was reached after the US agreed to cut 300,000 bpd in production on Mexico's behalf.

"Mexico thanks @OPECSecretariat countries for their support at the extraordinary meeting held today. The unanimous agreement of the 23 participating countries will lead to a 9.7 million reduction in oil production starting in May," Nahle wrote.

The historic agreement, the largest ever of its kind, comes in the wake of collapsed oil prices and a glut of crude on global markets following a short-lived price war initiated by Saudi Arabia and its allies last month following disagreements regarding how much production should be cut amid the drop in global economic activity resulting from the COVID-19 pandemic.

The deal comes following days of intense negotiations between the energy ministers of OPEC+ members and partner nations.

The collapse in prices hit major producers around the world, forcing them to eat into their reserves or rack up debt. The US, whose shale producers face a higher breakeven price as is, were hit even harder, with at least one major producer filing for bankruptcy and major American banks making preparations to prepare to take over oil and gas fields in the event that more companies fold up. The US is not a partner to the deal, but OPEC+ has previously indicated that it would like non-members, including America but also Canada, Brazil and Norway to enact an additional 5 million bpd in cuts. The Trump administration has instead suggested that market forces will make the cuts, and has refused to set up any hard limits. On Friday, the US president offered to commit to 250,000 bpd in cuts on Mexico's behalf, with President Andres Manuel Lopez Obrador calling the offer "generous."