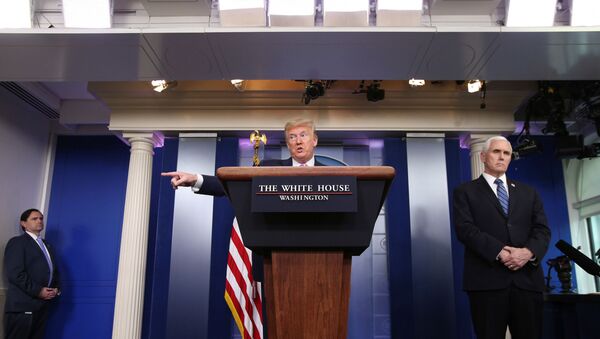 WASHINGTON (Sputnik) – US President Donald Trump signed a decree to impose visa sanctions on countries that are denying or thought to be unreasonably delaying the acceptance of their citizens traveling from the United States amid the COVID-19 pandemic.

"Countries that deny or unreasonably delay the acceptance of their citizens, subjects, nationals, or residents from the United States during the ongoing pandemic caused by SARS-CoV-2 create unacceptable public health risks for Americans. The United States must be able to effectuate the repatriation of foreign nationals who violate the laws of the United States," Trump said in a memorandum issued on late Friday.

According to the memorandum, the Secretary of State is expected to "adopt and initiate a plan to impose visa sanctions provided for in section 243(d) of the INA [Immigration and Nationality Act]," no later than 7 days after receipt of a notification from the secretary of the Department of Homeland Security.

During a White House coronavirus task force press briefing in Washington, Trump said that in just four days of the current week, excluding the Good Friday holiday, the economy showed "the biggest market increase, stock market increase that we've had in 50 years", remarking that he believes that "there's something very good going to happen".

As the global pandemic grinds on, the number of confirmed coronavirus cases in the US has surpassed 499,000 with more than 18,600 fatalities, according to Johns Hopkins University Resource Centre data.