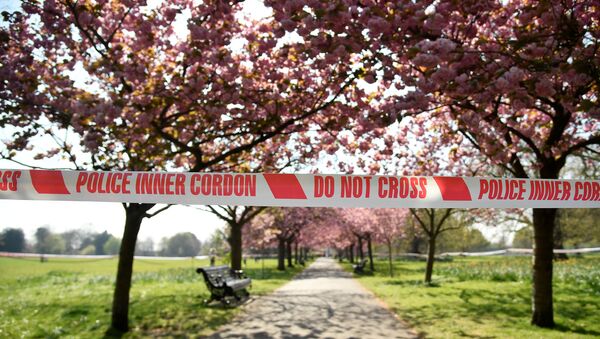 The UK recorded its worst coronavirus death toll on Friday, with 980 people succumbing to COVID-19 – bringing the total death toll in the country to 8,958.

While government plans are reportedly being drawn up in the UK to gradually start taking the country out of the lockdown in May, social distancing protocols which are in place to curb the spread of COVID-19 may have to stay in place "indefinitely", reports The Telegraph.

Concerned that the coronavirus might take longer to stamp out, scientists are reportedly advising Whitehall to encourage the country to adapt to long-term lifestyle changes that would effectively reduce human contact until a successful vaccination has been found.

Measures such as encouraging working remotely may need to remain in place indefinitely in the face of the persistent threat of the virus, and to fight future epidemics.

It is understood that as the UK starts relaxing current lockdown procedures, Britons will be requested to restrict interactions like visiting friends and relatives, and voluntarily adhere to such social distancing measures as working from home for many months, or even years, in the hopes this will stop a second wave of the respiratory virus from emerging.

Currently, Whitehall is believed to be considering opening schools first, sometime in early June, hoping to have pupils potentially return to their studies after the summer half term.

The consideration would in this case prioritise groups such as Years 10 and 12, which are facing GCSE and A-level exams.

The outlet cites a senior government source as suggesting that measures would have to be taken to reduce contact between children.

“Even if they come back, you will have to have a social distance, and it’s hard to do in a class of 30. It would mean that you couldn’t have everyone at the same time. You have to focus on the key groups of the year, such as year 10 and year 12,” the source is quoted as saying.

A "staggered" approach is reportedly urged by Teachers Unions, with Department of Education (DfE) officials looking at ways to bring different age groups back over an extended period of weeks. 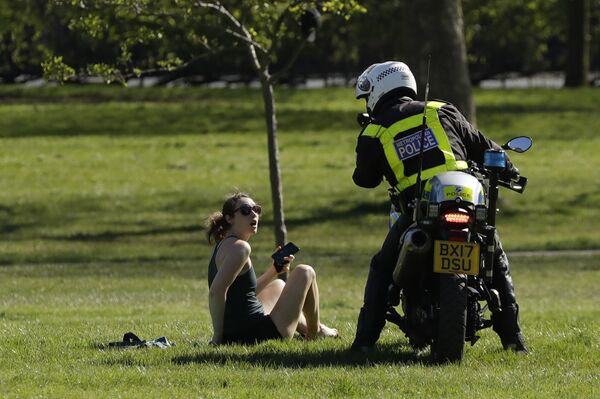 A woman is told to go home by a police officer on a motorbike to stop the spread of coronavirus and keep the park open for people observing the British government's guidance of social distancing, only using parks for dog walking, one form of exercise a day, like a run, walk, or cycle alone or with members of the same household, on Primrose Hill in London, Sunday, April 5, 2020.
© AP Photo / Matt Dunham

With the easing anticipated to be followed by opening of shops, the elderly and vulnerable among the population would nevertheless be asked to stay at home for longer.

Reports about the exit strategy under consideration come as many within Whitehall are cited as expressing concerns over the economic fallout from the COVID-19 pandemic and the measures put in place to curb it.

The Treasury is believed to fear that the GDP will plummet by more than 14 percent in the next three months.

The potentially resulting economic downturn, spiralling poverty and unemployment might ultimately take a greater human toll in the long term than the respiratory virus itself, senior Conservative MPs have allegedly warned.

Sir Iain Duncan Smith, former leader of the Conservative party, was cited as saying “it would not be possible for us to be locked up until May”.

“We fully understand that – if there is a significant drop in people’s incomes – this may have an impact on their health,” a government source is quoted by the outlet as emphasising.

This comes as cited government plans suggest an effective lockdown might stay in place for 13 weeks, with the ensuing restrictions in place until the end of May.

On Thursday, Foreign Secretary Dominic Raab, who is deputising for Prime Minister Boris Johnson while he recovers from coronavirus, chaired a meeting of the government’s emergency Cobra committee, where he said that while signs suggest the lockdown measures are having an impact, “it’s too early to say that conclusively”.

Adding that the current restrictions are being kept under review, the minister said:

“We don’t expect to be able to say more on this until the end of next week. The measures will have to stay in place until we’ve got the evidence that clearly shows we’ve moved beyond the peak.”

The Telegraph reports that government science advisers are scheduled to meet on Thursday, after which ministers might begin “getting things done” regarding an exit strategy.

The UK recorded its worst daily fatality from the coronavirus on 10 April, with 980 dead in the country’s hospitals, taking the total to 8,958. Cabinet ministers, meanwhile, have been stressing the need for people to stay home over the weekend despite the weather enticing them to venture out.

“We never forget that behind this number, behind each one is a name, a loss, and a family that will never be the same again.”

Despite official figures hinting that hospital admissions may be close to a plateau, and cautiously suggesting the figures are dropping in London, with the epidemic potentially hitting its peak this weekend, scientific advisers are reportedly expressing greater caution.

“This Easter will be another test of the nation’s determination. It’s a time of year when people get together normally. But whatever the weather, whatever the temptation of your beach or your park, we need everyone to stay at home… Because in hospitals across the country, NHS staff are fighting day and night to keep desperately sick people breathing, and they need you to stay home,” Matt Hancock was quoted as saying.