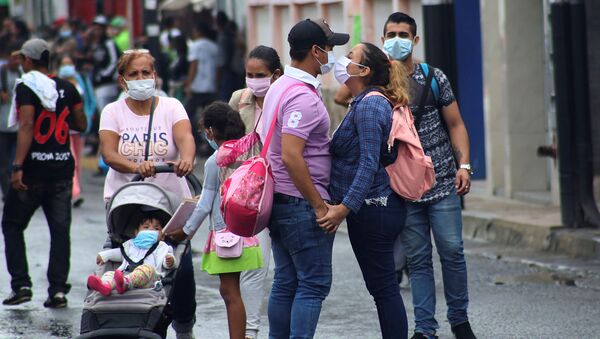 © REUTERS / CARLOS EDURADO RAMIREZ
Subscribe
Ilya Tsukanov
All materialsWrite to the author
With ‘just’ 175 confirmed COVID-19 cases, 9 fatalities and 84 full recoveries, Venezuela has so far managed to stop the virus from reaching pandemic proportions. And they’ve done it despite years of US sanctions pressure, which has weakened the nation’s healthcare system and collapsed its economy.

Nearly a month after the World Health Organization classified the new coronavirus epidemic as a pandemic, Venezuela has managed to keep its case numbers down, even as neighbours like Colombia (2,470+ confirmed cases) and Brazil (19,940+ cases) face dangers associated with a geometric growth in the number of infections.

Venezuelans speaking to Sputnik have attributed their comparably low infection rates to the government’s speedy and comprehensive measures to deal with the crisis.

“Caracas has become unrecognizable,” resident Eugenia de Madrid says. “It’s been a completely empty city for the fourth week in a row now. I live in a twenty-story building, and during the quarantine, I’ve never crossed paths with my neighbours, either in the elevator or at the entrance. Everyone is sitting at home, schoolchildren and university students are studying online. The government is providing the needy with food rations, although these consist only of carbohydrates.”

Authorities have tasked communities with ensuring the continued operation of a national emergency food supply delivery network, which serves seven million families, as well as house-to-house visits by doctors.

#INPICTURES 📸 | Solidarity between Chinese, Cuban and Venezuelan doctors to face the #COVID19 in Venezuela. Chinese doctors learned the "house by house," a Venezuelan methodology and exchanged knowledge and professional experiences. #VenezuelaAvanzaEnSalud pic.twitter.com/M1JanRFCuc

Under national quarantine rules, citizens are allowed to leave their homes only to go to the grocery store or the pharmacy. Authorities have left street food markets open, requiring people to have their temperature taken and to disinfect their hands before entering. Some are equipped with additional precautionary measures.

“At the entrance to the market are structures which look similar to a shower,” Caracas resident Anna Osipova de Osal reports. “There, everyone is sprayed with a disinfectant solution. In our family, only my husband goes out to shop, and he complies with all safety rules,” she adds.

Teams of workers are also deployed in major cities to disinfect stores, public squares, central streets and other areas.

#SundayThoughts In #Mérida / #Venezuela the Government headed by @maduro_en is deployed to disinfect avenues and streets of the cities to diminish the outbreaks of #COVIDー19 contagion.Despite the criminal sanctions #US Gov.has imposed to our country, we keep struggling! pic.twitter.com/sedSuSVkFg

“Masks and gloves are required in the city. The few cars driving through the city are stopped by traffic police, who check on their passengers,” de Madrid says.

One issue which residents have found concerning is the lack of gasoline supplies due to US sanctions against state oil giant PDVSA. According to de Osal, gas has become simply impossible to find, even for big money. “Venezuelans are no strangers to crisis situations. We’ll see how much patience we have this time,” she says.

For now, the government has resorted to rationing fuel to government services, including medical workers, police and the military.

It's unbelievable that in the midst of a pandemic the US not only refuses to lift the sanctions, but also threatens & persecutes the vessels that may bring gasoline into the country, and the suppliers of inputs & additives to produce it in Venezuela. Cruelty at its best pic.twitter.com/TnnK7LGYki

Washington has sought to take advantage of the pandemic, refusing to remove sanctions against Venezuela, accusing its leaders of running a drug smuggling ring, and proposing that a “transitional government” take over to resolve the 15-month-long long political crisis which began in January 2019 when US-backed opposition lawmaker Juan Guaido proclaimed himself ‘interim president’. Caracas has rejected the proposal, saying it would never agree to submit to Washington’s “tutelage.”

Last month, the International Monetary Fund refused to provide the Latin American nation with a $5 billion loan to help it cope with the coronavirus, claiming that there was “no clarity on recognition” on whether Nicolas Maduro was the country’s legitimate president, even though 2/3 of the IMF's members continue to recognize him as such. 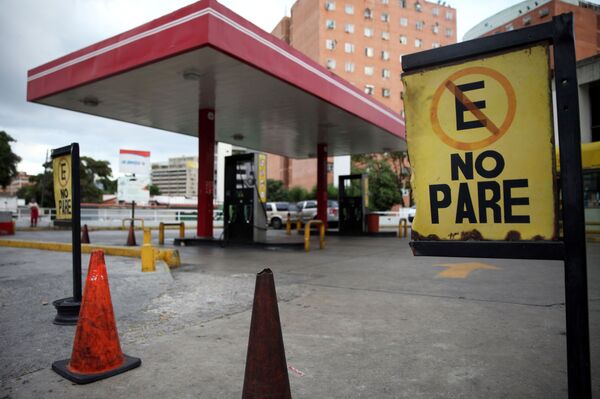 A closed fuel station is seen during the nationwide quarantine in response to the spread of coronavirus disease (COVID-19) in Caracas, Venezuela March 30, 2020. Picture taken March 30, 2020. REUTERS
© REUTERS / STRINGER

Tatyana Rusakova, a researcher at the Center for Crisis Society Studies, a major Moscow-based think tank, says the ‘transitional government’ idea seemed like it was designed to fail, given that neither the authorities, nor the opposition, nor the US are ready to make any compromises, even in the face of a pandemic.

“What kind of negotiations are there to speak of if the Americans first promise $15 million for Maduro’s head, and then say that they could lift sanctions if Maduro agrees to a transitional government?” she asks. “Of course Maduro won’t do this. Especially because the US hasn’t made any guarantees.”

According to Rusakova, the safest course of action would ultimately be for the US to lift sanctions without any preconditions. “The situation around coronavirus in Latin America is serious. Many Venezuelans are returning home from neighbouring countries, and the epidemic may get out of control. Taking account of the fact that all of this is happening in the Western hemisphere, no one will be safe from further complications.”

Dungeon Ambassador from Terra
11 April 2020, 21:28 GMT9
000000
Newsfeed
0
New firstOld first
loader
LIVE
Заголовок открываемого материала
Access to the chat has been blocked for violating the rules . You will be able to participate again through:∞. If you do not agree with the blocking, please use the feedback form
The discussion is closed. You can participate in the discussion within 24 hours after the publication of the article.
To participate in the discussion
log in or register
loader
Chats
Заголовок открываемого материала
Worldwide
InternationalEnglishEnglishMundoEspañolSpanish
Europe
DeutschlandDeutschGermanFranceFrançaisFrenchΕλλάδαΕλληνικάGreekItaliaItalianoItalianČeská republikaČeštinaCzechPolskaPolskiPolishСрбиjаСрпскиSerbianLatvijaLatviešuLatvianLietuvaLietuviųLithuanianMoldovaMoldoveneascăMoldavianБеларусьБеларускiBelarusian
Transcaucasia
ԱրմենիաՀայերենArmenianАҧсныАҧсышәалаAbkhazХуссар ИрыстонИронауОssetianსაქართველოქართულიGeorgianAzərbaycanАzərbaycancaAzerbaijani
Middle East
Sputnik عربيArabicArabicTürkiyeTürkçeTurkishSputnik ایرانPersianPersianSputnik افغانستانDariDari
Central Asia
ҚазақстанҚазақ тіліKazakhКыргызстанКыргызчаKyrgyzOʻzbekistonЎзбекчаUzbekТоҷикистонТоҷикӣTajik
East & Southeast Asia
Việt NamTiếng ViệtVietnamese日本日本語Japanese中国中文Chinese
South America
BrasilPortuguêsPortuguese
NewsfeedBreaking
08:43 GMTOpposition Parties in Maldives Join Hands in Calling For End to Indian Military Presence
08:29 GMTMexican Army Detains 'Priority Target' in 2019 Massacre of Mormon Family, State Attorney Says
08:10 GMTGun Involved in Killing Halyna Hutchins Was Reportedly Used by Crew Off-Set for Fun
07:34 GMTTop UK Army Bosses Accused of 'Covering Up' Killing of Kenyan Woman by British Soldier
06:11 GMTAs Israel Preps to Vaccinate Kids Against COVID-19, Some Say They Will Be Against 'Coercion'
06:06 GMT‘Inexperienced, Green’ Armourer on Alec Baldwin Film Set Described as ‘Careless With Guns’ Before
06:03 GMTHow Long Can Chelsea Survive Without a Striker?
05:22 GMT6.2 Magnitude Earthquake Shakes Taiwan - EMSC
05:14 GMTUS Still Ready For Dialogue With North Korea Without Preconditions, Special Envoy Says
04:31 GMTFacebook Struggled to Curb Violent, Divisive Content in India, Internal Documents Show
03:23 GMTWho’s the Best Football Player in the World?
02:45 GMTAmerican Film Institute Establishes Scholarship in Memory of Halyna Hutchins
02:30 GMTMore Than 10,000 Sequoias Must Be Removed After California Wildfires, National Parks Reveal
01:00 GMTWho has the Edge Between Manchester United and Liverpool?
00:12 GMTBritish Military Brings Over 100 People Who Had Left Afghanistan to UK - Defense Ministry
YesterdayUS Seeking Clarity Over Turkey’s Intention to Declare US Ambassador Persona Non Grata
YesterdayUS Authorities Getting Veterans Involved in Resettlement on Afghan Refugees - Reports
YesterdayBiden’s Popularity Drops More Than That of Any Other US Leader Since End of WWII - Poll
Yesterday‘Rust’ Director ‘Gutted’ by Fatal Shooting of Halyna Hutchins on Set
YesterdayPotty-Mouthed PM: Broadcaster Blocks Boris Johnson's Remarks on Gay Men, Muslim Women