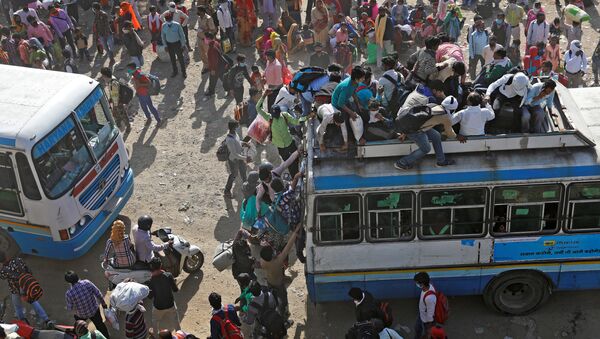 Ashutosh Kumar
Sputnik correspondent
All materialsWrite to the author
New Delhi (Sputnik): Indian Prime Minister Narendra Modi announced a 21-day countrywide lockdown until 14 April, which includes the suspension of all modes of transport, including railways and buses. Immediately after the announcement, many migrant labourers set out on foot for their hometowns, deprived of work and seeking shelter.

For 33-year-old Rameshwar Yadav, a construction labourer in New Delhi, every single day of the ongoing COVID-19 lockdown brings thoughts of how to reach his hometown Gaya in the Indian state of Bihar once the lockdown is lifted on 14 April.

With no work, idling away time at a job site, his thoughts return to his parents, wife and children over 1,200 kilometres away.

Yadav is among those who could not leave for their hometowns when construction workers and other migrant labourers set out on foot for an arduous journey to their hometowns. These workers feared the loss of their livelihood and access to food and shelter in Delhi and the adjoining industrial areas of Noida, Ghaziabad, Gurgaon and Manesar.

Yadav was employed in the redevelopment of the Pragati Maidan Complex in central Delhi, the venue at which the Indian Trade Promotion Organisation (ITPO) hosts an annual trade fare. The $300 million landmark complex, which is being constructed by the National Buildings Construction Company (NBCC), is already running into delays.

It was supposed to be completed last year but a construction ban imposed by the Supreme Court as part of Delhi's struggle with severe air pollution delayed it. The company rescheduled the completion deadline for July of this year, but uncertainty concerning the COVID-19 pandemic is likely to further delay the completion of the project. 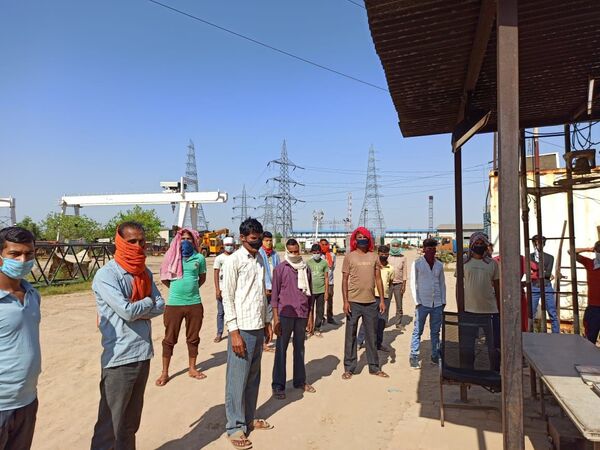 Workers like Yadav who are employed with the NBCC project live at a nearby labour site managed by one of the NBCC’s contractors, Shapoorji Pallonji Group – a construction and infrastructure company.

However, a majority of the migrant workers have left in the wake of the lockdown and are unlikely to return in the near future. Those staying here want to leave the moment the lockdown is lifted and transport becomes available.

Yashwant Singh, who is in charge of security at the labour site, tells Sputnik, “The site has a capacity to house at least 6,500 labourers. Before the lockdown, at least 4,500 labourers were there at the site. 3,000 have already gone to their hometowns and 1,500 are now here. There is no problem whatsoever regarding food, as a number of Non-Government Organisations (NGOs) supply food twice in a day.”

Pankaj Kumar, who works with Shapoorji Pallonji and handles the administration of the site, says that the labourers from the nearby areas of Uttar Pradesh departed on foot, but those from the far flung states of Bihar, Jharkhand and Bengal are staying put. Kumar claims that once the lockdown concludes, not a single labourer will remain.

The majority of the remaining 1,500 want to go back once the lockdown is lifted, owing to “uncertainty” and also “concerns about the family back home”.

“I have my parents, my wife and children back home. I need to take care of them. There is lot of uncertainty around the work”, labourer Rameshwar Yadav tells Sputnik. 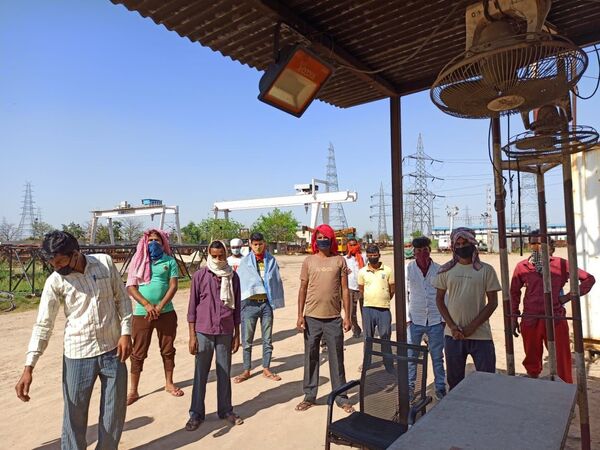 Ashok Yadav agrees: the migrant labourer from Ghazipur in Uttar Pradesh is also employed at the NBCC site.

“We do not know until when all this will continue. Who knows whether there will be another lockdown in the next month?” Ashok wonders.

Some of the labourers also complain that their contractors have not paid them. Narendra Kumar Paswan – a migrant labourer from the Indian state of Bihar said that the labour contractor which brought him to the site, has "not made any payment in the last week”.

One of the labour contractors, Rajendar, who sources labourers from Bihar, says that non-payment of money is one of the major issues.

“Since construction is not happening, a number of labourers are not getting money and that’s why they are leaving for their hometowns in search of agrarian work,” says Rajendar, claiming that it is true of almost all construction sites in Delhi.

When asked whether the labour that has gone will come back any time soon, Rajendar replies, “Those who have reached in their native towns and villages have been quarantined due to the fear of the pandemic. Six of my labourers have also been quarantined and are now under medical observation. The labour will definitely go back but only when things get stabilized completely.”

According to the Labour Commissioner office of the Government of Delhi, the total population of workers in Delhi as per the 2011 government of India census, updated in 2018, is 5.3 million.

Industry also believes that the labour exodus is likely to create problems for them. Niranjan Hiranandani, president of the industry association Assocham tells Sputnik, “Factories and the construction sector are taking care of their labours, but if all those who have already gone get involved in agricultural work in their respective rural areas, they may not get back to industry and construction very soon.”

The labour exodus isn't just happening in Delhi. It has happened in major industrial cities throughout the country. Delhi’s neighbouring cities of Gurgaon and Manesar,  which are among the country's auto manufacturing hubs have also also seen a widespread exodus.

India's Opposition Party Wants Narendra Modi to Arrange COVID-19 Trains For Stranded Labourers
Also, Noida and Ghaziabad which house a large number of small scale production units, have seen an exodus of labour. Southern cities such as Nagpur, Bangalore, Pune, and Mumbai too have seen the phenomenon.

The Pocket Book of Labour Statistics, 2017, issued by the Indian Ministry of Labour, gives an idea of the number of labourers employed in factories across the country. According to the document, in 2014, there were 11,332 factories in the state of Haryana (adjoining Delhi), employing 186,000 workers, while Maharashtra has 38,984 factories employing 1.4 million workers.

“Labour willing to go back is just one of the challenges. The government has already announced food and cash entitlements for three months to the marginalised segment of society. In addition to the labour situation, we also have to see the demand situation. However, it is given that there will be an impact on the future macro indicators such as GDP, the index of industrial production and core sector growth,” the representative said.