US Warships Struggle over COVID-19 as China Holds Naval Drills in the Pacific, According to US Media 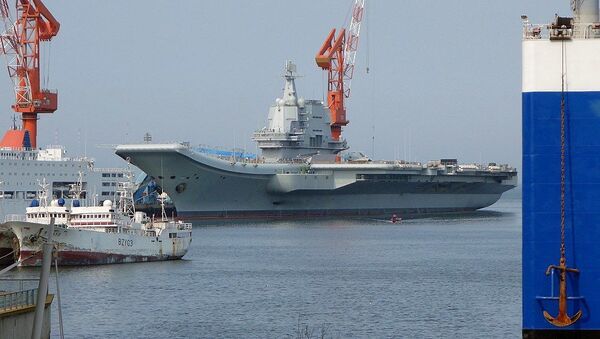 CC BY-SA 4.0 / Tyg728 / Type 002 aircraft carrier of People's Liberation Army Navy
Subscribe
As the US has currently logged more COVID-19 cases than any other country, China has ceased reporting new instances of the disease, lifting the 76-day lockdown of its city of Wuhan, which was once the epicenter of the pandemic.

In May, Type 22 missile boats were deployed to the area for four days of live-fire exercises.

The drills were said to involve warfighting scenarios seeking to enhance the coast combat skills of the vessels along the coast, as well as counter-mining, damage control and rescue operations. 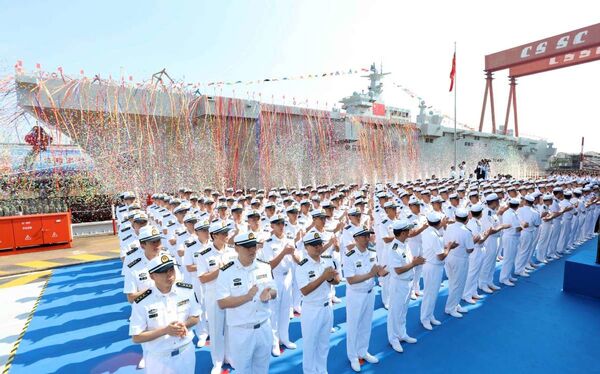 Referred to as "HOUBEI-class wave-piercing catamaran missile patrol boats" by the Pentagon, the stealth and speed of the Type 22 fleet are what allows it to overcome larger targets such as aircraft carriers, such as those deployed to the Pacific by Washington.

The drills were carried out in a region which is a sticking point in relations between Washington and Beijing.

The waters of the South China Sea, which are disputed by five countries and Taiwan but mostly controlled by Beijing, are frequently visited by US Navy ships that Washington claims are conducting freedom of navigation operations.

The passage of US destroyers and aircraft carriers near the disputed islands has angered the Chinese government, which protests over what it slams as “provocations” and violations of Chinese sovereignty.

Warships in the Grip of COVID-19

The current drills come against the backdrop of reports of US aircraft carriers are in the grips of the novel coronavirus disease, with hundreds of sailors infected, reported the outlet.

At least four advanced US warships have been linked to cases of COVID-19, with a vessel that most recently visited the South China Sea, the Guam-anchored USS Theodore Roosevelt, registering some 416 cases as of Thursday.

A sailor assigned to the aircraft carrier was reportedly rushed to hospital and placed in intensive care Thursday after being discovered unconscious, according to an emailed statement from the Navy cited by Business Insider. The sailor had been in a 14-day quarantine at Naval Base Guam.

The USS Theodore Roosevelt had reported 416 COVID-19 cases as of Thursday morning, after 286 cases had been reported by the Navy on Wednesday.

The Navy is said to be waiting for results of over one thousand tests. 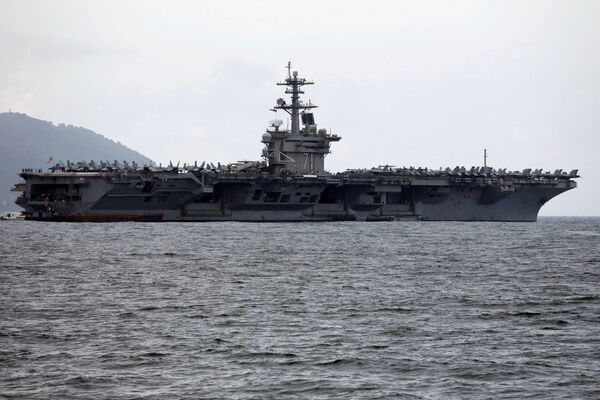 This comes after Crozier was demoted last week by ex-acting Navy Secretary Thomas Modly over a leaked memo where he was found to have sent urgent letters to his command requesting assistance to combat the coronavirus outbreak.

Modly himself resigned on 31 March after a speech addressed to the ship's crew criticising the former CO leaked to the press, where the former Acting Navy Chief accused Crozier of being "too naive or too stupid" to lead the ship.

COVID-19 cases have been also reported among sailors stationed on the USS Ronald Reagan, currently in Yokosuka, Japan and at least one service member of the Washington-based USS Carl Vinson has also reportedly tested positive.

The USS Nimitz was revealed on Thursday to have "a very small number of breakouts," according to Air Force General John Hyten, vice chairman of the Joint Chiefs of Staff.

“It's not a good idea to think that the Teddy Roosevelt is a one-of-a-kind issue. We have too many ships at sea, we have too many deployed capabilities. There's 5,000 sailors on a nuclear-powered aircraft carrier. To think that it will never happen again is not a good way to plan. Our military remains ready and continues to operate around the globe," he added.

The COVID-19 novel coronavirus was first detected in China’s Wuhan and has since infected 81,518 people in the country since December 2019.

However, after an unprecedented effort to contain the outbreak by means of mobilizing military resources and resorting to rigid isolation scenarios, currently the country has ceased reporting new instances of the disease, lifting the 76-day lockdown of Wuhan, the original epicenter of the coronavirus crisis.

On Wednesday, healthy residents and visitors were allowed to leave the capital of Hubei province, with trains and flights resumed and highway entrances reopened, as the country is now moving towards easing the restrictions imposed to contain COVID-19.