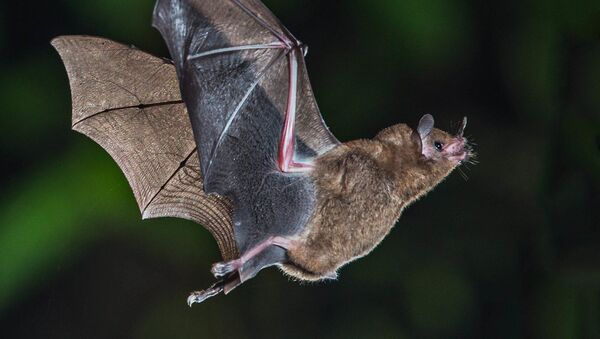 CC BY 2.0 / Andy Morffew / Short-tailed Fruit Bat
Subscribe
International
India
Africa
The new types of coronavirus have been found in three bat species. They are thought to have no close links to the strains that cause lethal diseases like SARS, MERS or COVID-19, and it is yet unclear whether they can spill over to other species including humans.

Scientists have discovered six new coronavirus strains in bats in Myanmar as part of the effort to identify new dangers while the COVID-19 pandemic is gripping the planet.

Researchers with the Smithsonian’s Global Health Programme identified the viruses through a painstaking sample collection across 11 bat species in the Asian country, according to the paper published in the journal Plos on Thursday.

They have collected over 750 saliva and guano samples between 2016 and August 2018 at sites where humans are more likely to come into contact with bats through guano harvesting, religious practices, and ecotourism.

The former three viruses were named PREDICT-CoV-47, 82, and 90, while the latter three are referred to as PREDICT-CoV-92, 93, and 96. The “PREDICT” part of the name related to the eponymous US government programme that seeks to identify new infectious diseases that could spread from wildlife to humans.

The newly-discovered strains belong to the coronavirus family, but are not thought to be closely related to the viruses that cause the Severe Acute Respiratory Syndrome (SARS), Middle East Respiratory Syndrome (MERS) or COVID-19. Nor is it clear whether they can infect humans, and how dangerous they are to human health.

“Many coronaviruses may not pose a risk to people, but when we identify these diseases early on in animals, at the source, we have a valuable opportunity to investigate the potential threat,” study co-author Suzan Murray, director of the Smithsonian’s Global Health Programme, said in a press release. “Vigilant surveillance, research and education are the best tools we have to prevent pandemics before they occur.”