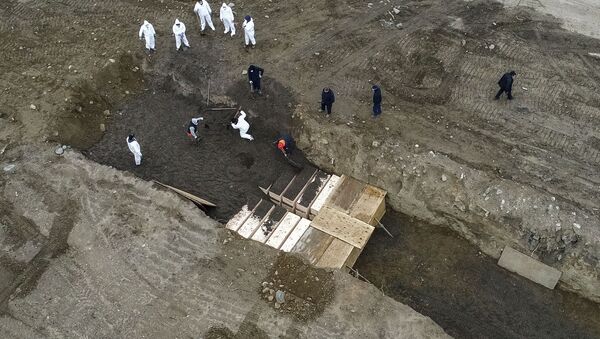 MOSCOW (Sputnik) - Authorities in New York City, the epicentre of the current COVID-19 outbreak in the United States, will begin burying victims of the disease in mass graves on Hart Island in the Long Island Sound, a mayoral spokeswoman told The New York Post.

"For decades, Hart Island has been used to lay to rest decedents who have not been claimed by family members. We will continue using the island in that fashion during this crisis and it is likely that people who have passed away from COVID who fit this description will be buried on the Island in the coming days," Freddi Goldstein, the spokeswoman for the mayor’s office, told the newspaper on Thursday.

In recent weeks, the Hart Island Project non-governmental organisation, which seeks to provide information and access to the public cemeteries on the island, has published video footage captured with the use of a drone showing the digging of mass graves there.

New photos published on Thursday appear to show at least 40 caskets being buried in a single mass grave, the newspaper reported.

​New York State Governor Andrew Cuomo announced on Thursday that the total number of COVID-19 cases confirmed in the state since the start of the outbreak has reached 159,937, resulting in the deaths of 7,067 people. A total of 87,028 cases have been confirmed in New York City alone.