‘In Early Stages of Recovery’: Boris Johnson Leaves ICU but May Need Month to Recover – Reports 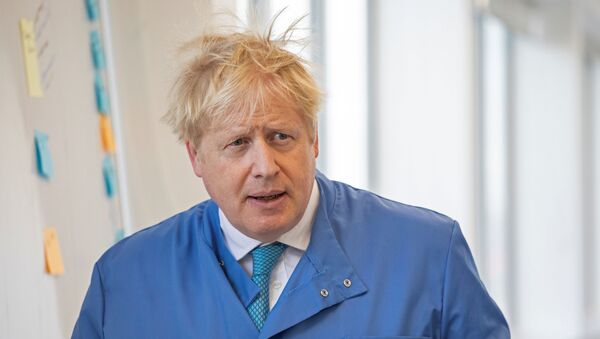 MOSCOW (Sputnik) - On Thursday, Downing Street announced that Johnson had been transferred from an intensive care unit to a general ward after undergoing treatment. He received oxygen but he did not require the use of a ventilator.

British Prime Minister Boris Johnson, who is being treated for the COVID-19 respiratory disease, will most likely return to his duties in a month, writes the Times with reference to government sources.

Boris Johnson spent three nights in the intensive care unit at St. Thomas' Hospital in London as his COVID-19 symptoms worsened, after he was initially diagnosed with the novel coronavirus respiratory disease two weeks ago.

Desite the fact that on Thursday evening Johnson’s office announced that the Prime Minister had been transferred from intensive care to a regular ward, a number of Downing Street sources are cited by the publication as believing full his recovery will take at least a month, and even after that a return to duties will have to be gradual, as COVID-19 patients who require ICU care can expect a long road to recovery.

On 9 April a No 10 spokesman said: “The Prime Minister has been moved this evening from intensive care back to the ward, where he will receive close monitoring during the early phase of his recovery. He is in extremely good spirits.”

Boris Johnson was first admitted to St Thomas' Hospital on Sunday night, and transferred to the ICU on 6 April, as his symptoms, including a persistent cough and fever, worsened.

In a tweet on Monday Johnson said he was "keeping in touch with my team as we work together to fight this virus and keep everyone safe", while thanking "brilliant NHS staff" for taking care of him and other patients.

​Johnson spent three nights in intensive care, with UK media reporting he was responding to standard oxygen treatment but did not require mechanical ventilation.

According to The Sun, Downing Street acknowledged that Boris Johnson would be off work for weeks and even months if that was what his doctors advised.
Medical experts cited by the outlet conceded that seriously ill patients will generally need one week of recuperation for every day spent in an ICU.

On 7 April the UK prime minister's spokesman told reporters Boris Johnson was receiving standard oxygen treatment and was breathing without any other assistance.

"The prime minister has been stable overnight and remains in good spirits. He is receiving standard oxygen treatment and breathing without any other assistance. He has not required mechanical ventilation, or non-invasive respiratory support", the spokesman said.

Regarding the date when Boris Johnson might be expected to resume office, the official spokesman said:

"The Prime Minister will absolutely follow the advice of his medical team.”

At the moment, Johnson’s stand-in, Foreign Secretary Dominic Raab, has been presiding over cabinet meetings and overseeing the country's fight against the COVID-19 coronavirus, with the Prime Minister still in charge of the government and issuing directions when needed, according to a cabinet statement.

In the meantime, the United Kingdom has reported over 65,800 cases of COVID-19, and the death toll in the country has reached 7,900, according to data from Johns Hopkins University, with 359 recovered from the disease.